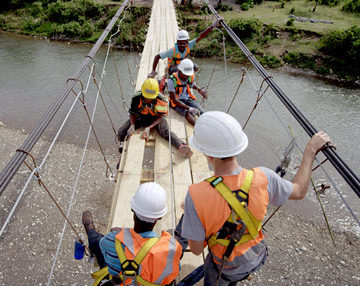 The accolades keep rolling in for Dream Big: Engineering Our World.

The giant-screen film presented by Bechtel and produced by MacGillivray Freeman Films in partnership with ASCE opened in February to rave reviews from the critics.

It was a hit with the public too, surpassing 1 million paid viewers in less than six months.

The GSCA honors are akin to the Oscars of the IMAX movie industry.

The film also recently received a Silver Award in the American Society of Association Executives’ Power of A awards program, and will receive the Spirit of ECC Award at that group’s conference in December.

From the beginning, Dream Big was created to be more than a film; it was developed as the core of an outreach campaign to encourage engineering careers. ASCE helped to develop a series of events and resources, including more than 50 hands-on activities, for students, parents, and teachers.

Even as the film continues building on its million viewers at theaters into the new year, ASCE has a new goal: putting Dream Big into every U.S. public school in 2018. The educational toolkits will include a DVD of the film, a teacher’s guide, and accompanying educational videos.

“Dream Big is living up to its name,” said ASCE Executive Director Tom Smith. “It is unlike anything ASCE and its partners have ever done before. We’re delighted to see the film reaching a new and broader audience, with a global impact.”

The Dream Big project is led by ASCE with a coalition of engineering organizations and support from Bechtel, the ASCE Foundation, the United Engineering Foundation, and the National Council of Examiners for Engineering and Surveying.

Visit the official movie site for more on Dream Big and where you can see it.