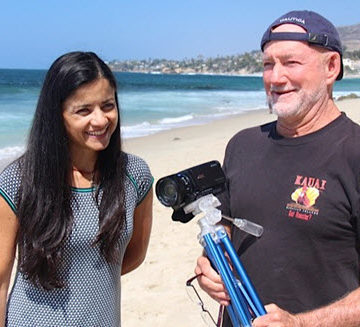 The “dream prize” called for dinner and the movie.

But everyone had such a good time, the prize extended through the three-day weekend.

MacGillivray and his wife, Barbara, enjoyed meeting Rodriguez so much they invited Rocio and her family, who were her guests on the trip, to their Laguna Beach house each of the three days of the dream-prize visit.

“It was amazing,” said Rodriguez, P.E., M.ASCE, a structural engineer for Siemens in Orlando, FL. “Their backyard is the sand of the beach. You walk out and you’re right at the beach.

“They were so nice to us, so welcoming. We really clicked.”

MacGillivray is an Academy Award–nominated filmmaker who specializes in IMAX technology. His innovative use of helicopter camera mounts in the 1970s ushered in a new era of giant-screen films.

Dream Big, slated for nationwide release in February, will highlight some of the world’s greatest engineering feats while showcasing the vital role engineers play in society.

Rodriguez, her husband, and their three children got the full, luxury private-screening experience – complete with popcorn, candy, and sodas – as they watched an early edit of Dream Big at the MacGillivray Freeman Films headquarters in Laguna Beach.

“My kids were taking notes,” Rodriguez said. “They were really excited, knowing that they were some of the first people to see the movie.” 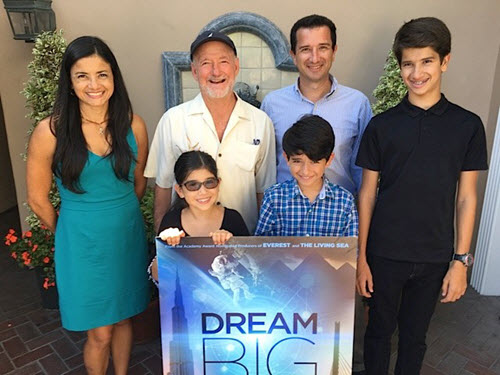 So can the Rodriguez family offer ASCE members a preview of what they can expect from the Dream Big film?

Well, maybe not exact details. But Rocio did provide a two-thumbs-up review.

She was especially interested as a civil engineer in a sequence involving the Shanghai Tower. Her children liked the scenes that featured kids just like them learning about engineering.

If anything, they liked the film too much. MacGillivray and the production team asked for any suggestions or constructive criticism. Rocio didn’t have many notes: “I think the movie is perfect the way it is,” she said.

Marta Alvarez, P.E., L.S., M.ASCE, president of YCE Engineering & Surveying in Ventura, CA, won a Dream Big premiere event, which will be held in her community when the film is released early next year.

Learn more about the film, watch the latest trailer, and find out how you can get involved in Dream Big outreach programs.