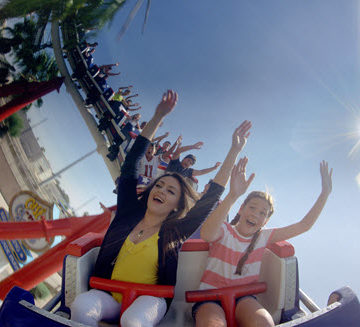 More than 1 million viewers have experienced the Dream.

Dream Big: Engineering Our World, the giant-screen film presented by Bechtel and produced by MacGillivray Freeman Films in partnership with ASCE, has surpassed the 1 million paid-viewer mark – and did so in less than six months. Audience survey data shows that approximately half of the attendees have been under the age of 17.

“Reaching 1 million paid viewers in just a few months is outstanding and shows how excited people, both young and old, are about the engineering stories told in this film – stories of heart and sacrifice and human spirit and dedication to achieving a greater good,” said Dream Big director Greg MacGillivray. “These themes will make everyone proud to be an engineer.”

The film premiered to rave reviews Feb. 17 in museums and other giant-screen theaters around North America. It has since opened in England, Kuwait, and Russia, and will add several more U.S. venues this autumn and winter, including Boston and Austin, TX.

From the beginning, Dream Big was created to be more than a film; it was developed as the core of an outreach campaign to encourage engineering careers. ASCE helped to develop a series of events and resources, including more than 50 hands-on activities, for students, parents, and teachers.

Even as the film continues building on its million viewers at theaters into the new year, ASCE has a new goal: putting Dream Big into every U.S. public school in 2018. The educational toolkits will include the film itself, a teacher’s guide, and accompanying educational videos.

“Dream Big is living up to its name,” said ASCE Executive Director Tom Smith. “It is unlike anything ASCE and its partners have ever done before. We’re delighted to see the film reaching a new and broader audience, with a global impact.”

Visit the official movie site for more on Dream Big and where you can see it.