Dream Big Enters 2018 Bigger Than Ever 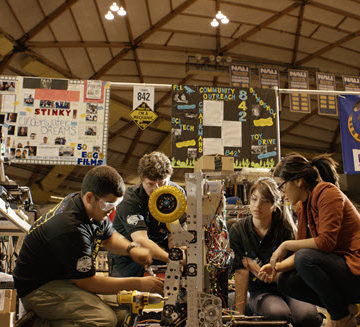 Engineer Angelica Hernandez mentors students from her former Phoenix high school as they prepare to enter a robotics contest. ASCE members can help bring the Dream Big film into schools in 2018.

Dream Big: Engineering Our World remains a staple on giant screens in museums and theaters around the world. The film has been translated into five languages and shown on three continents, with recent or upcoming openings in England, Kuwait, and Russia as well as new U.S. openings in Boston, Philadelphia, St. Paul, MN, and Austin, TX.

The film has been popular with critics and audiences alike, sparking interest in the upcoming release of the film for home and educational viewing. The response from educators has been especially positive:

“I am an elementary school teacher, and I took my students on a field trip to see Dream Big in St. Louis last year. I want all my students to experience the movie and I’m wondering if the film will be available to purchase at some point soon?”

“All students should see this so they can Dream Big.”

“I can’t stop talking about Dream Big! I want every kid to see it. I really do think that this film will inspire a generation of kids (girls in particular) to become engineers. It is that powerful. We want the Chancellor and her staff to see the film, so they understand why we want public school students to see it.”

In response to this overwhelming interest, ASCE has set a new goal: putting Dream Big into every U.S. public school.

Placing the film and its companion educational resources in every school will expand the film’s audience to include students in rural and economically disadvantaged communities, support the growing need for curricula aligned with the Next Generation Science Standards, and promote greater interaction between engineers and educators.

The educational toolkits will include the film itself – in multiple languages and licensed for educational screening – a teacher’s guide, and accompanying educational videos.

To accomplish this ambitious goal, ASCE has secured generous support from the United Engineering Foundation. Together with UEF, ASCE and Bechtel have already committed to cover distribution to 30 percent of the 95,000 public schools in the United States.

And this is where ASCE members can play a crucial role.

ASCE Sections and Branches, along with individual members, can help put Dream Big in the remaining 70 percent of schools.

During Engineers Week, ASCE will launch a website that will allow individuals to give $5 to place a toolkit in the school of their choice. While the goal is to reach all U.S. public schools, members will have the option to purchase educational DVDs for private and parochial schools, as well as for international schools. (The cost of international distribution will be slightly higher.)

In addition to the school distribution campaign, 2018 will bring a number of other exciting Dream Big milestones:

April 2018: Dream Big will be released for home viewing on Blu-ray. ASCE members can purchase the Blu-ray at a special member price through ASCE’s store.

July 2018: Dream Big will be released in a streaming version.

Fall 2018*: The Dream Big educational toolkit, licensed for educational screenings, will be released.

Dream Big is presented by Bechtel and produced by MacGillivray Freeman Films in partnership with ASCE.

* Distribution to schools in areas where the exclusive theatrical licenses are still in force will take place in 2019.