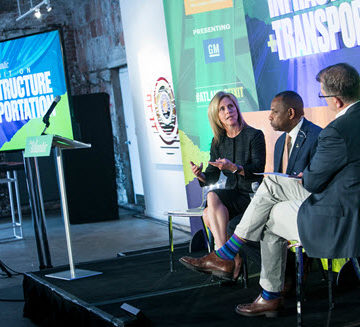 ASCE President Kristina Swallow speaks at the Atlantic’s Summit on Infrastructure and Transportation in Washington, DC.

And so, two months into Kristina Swallow’s ASCE presidency, she is taking the case for infrastructure directly to the nation’s capital.

“These are politically challenging times,” Swallow said. “I think everyone would agree that we’re struggling a little bit. Talking on the Hill this week, their message was, ‘We want to do something, but we’re just not sure we can come together on this.’

“And that to me says we as ASCE members, as voters, need to act. We need to start telling our elected officials that infrastructure is important.”

Swallow participated in a panel discussion, Wednesday, Dec. 6 at the Summit on Infrastructure and Transportation, hosted by The Atlantic, putting her infrastructure message in front of some of the industry’s biggest movers and shakers. ASCE Board of Direction member Roger Millar, the Washington State secretary of transportation, also spoke at the Summit.

“We had an opportunity to talk about how the underfunding of maintenance over decades – and the underfunding of capital improvements as well – has led to this point we’re at now where our infrastructure is not meeting the needs of Americans,” Swallow said. “But we also got to highlight solutions and the fact that we can solve this problem.”

So she knows this world. And she knows how to effectively communicate the infrastructure message.

Wednesday, Swallow visited the White House Eisenhower Executive Office Building to meet with DJ Gribbin, President Trump’s special assistant for infrastructure. With the administration planning to roll out an infrastructure plan in January, it was a particularly well-timed meeting.

“He talked to us about what the president’s priorities are going to be in the infrastructure package,” Swallow said. “We reiterated to him what priorities we felt were important. It needs to be sustainable; it needs to be resilient; it needs to have life-cycle costs as part of the analysis. We need to be looking at those projects that most effectively meet our needs – both for safety and long-term economic benefits.”

Swallow turned her attention, the next day, from the executive to the legislative branch, meeting with four members of Congress – two Democrats and two Republicans.

Ended the day meeting with @RepPeterDeFazio and @SenatorCarper on the need for a smart #infrastructure bill to improve our quality of life and drive our communities forward! Thank you both for your #leadership on infrastructure! @ASCETweets @ASCEGovRel pic.twitter.com/4oZ3gSGno7

“Having worked here in DC for three years, I really truly understand how important advocacy is,” Swallow said. “Our elected leaders want to do what’s right by their communities. But they rely on us to tell them what’s important and what the priorities are.

“We, as ASCE members, need to do a better job of reaching out and telling them that the priority needs to be infrastructure.”

Learn how you can reinforce Swallow’s advocacy efforts as an  ASCE Key Contact.