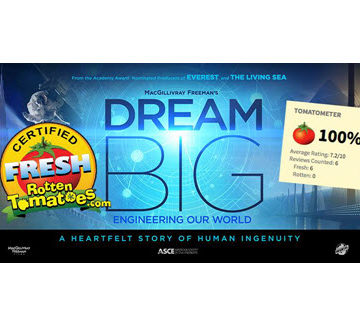 Dream Big is already scoring well on the Tomato-Meter.

The Rotten Tomatoes website collects film reviews and separates them into positive (fresh) and negative (rotten). Dream Big: Engineering Our World checks in this week at 100-percent fresh.

“Bolstered by sturdy computerized sequences and a rousing pop-song-populated score…, it’s the sort of majestic educational film that every adult will want their child to see — and, in all likelihood, will want to see themselves,” wrote Nick Schager in Variety.

For the sake of comparison, La La Land scores a 93-percent on the Tomato-Meter. Fifty Shades Darker? A 9-percent.

Dream Big, presented by Bechtel and produced by MacGillivray Freeman Films in partnership with ASCE, is playing on IMAX and other giant screens around North America.

Here’s a look at some of the other early Dream Big reviews:

• “It’s so easy to take for granted just what an accomplishment it is to conquer nature that we might forget, for instance, how amazing it is that skyscrapers even exist. But Dream Big shows these objects as they’re built — from skeleton to concrete skin — and it’s glorious.”

• “With its focus on problem-solving, teamwork and the power of the imagination, it’s certain to spark syllabus highlights for STEM teachers and their students…”

• “Extra props to MacGillivray Freeman and the ASCE for finding three fascinating women engineers from diverse backgrounds to profile. Each is a wonderful role model.”

• “As with most MacGillivray projects, there’s plenty of razzle-dazzle eye candy on display.”

• “With its inspiring stories of human grit and aspiration, and extraordinary visuals for the world’s largest screens, Dream Big reveals the compassion and creativity that drive engineers to create better lives for people and a more sustainable future for us all.”

Early word from the museums showing the film has been positive as well:

• “I can’t recall ever having encountered a documentary that had such unanimously glowing feedback for its first week – from teachers, staff, parents, kids, sponsors. Everyone has been raving about it, and many have been very moved by the stories. Our theater staff has overheard a few conversations as guests are exiting the theater when young guests are talking to their parents about being excited about careers in engineering.”

Learn more about where you can see the film and how you can get involved in Dream Big outreach activities.