This week we’re featuring another guest blogger. Michael Murphy is a graduate student at the University of Illinois. He is pursuing a Masters of Architecture with structures option. The degree will allow him to eventually pursue Illinois licensure in both architecture and engineering. Michael is therefore particularly interested in how different mindsets interact to produce elegant designs.

Engineers and architects are both problem solvers, but the processes they employ to solve problems differ. In An Engineer Imagines, Peter Rice, structural designer of the Sydney Opera House and the Pompidou Centre, analyzes the problem solving procedures of engineers and architects. Based on his work on high profile projects, Rice concludes that there is a fundamental difference not only in the work of architects and engineers but also in the way the two professions work. Architects work in the subjective; engineers seek to transform a problem into one that can be solved objectively. The architect’s response is primarily creative, while an engineer’s response is essentially inventive. (Rice 1996) On the Sydney Opera house project, Rice was incorporated into the team after Danish architect Jørn Utzon won the competition with his striking wave-like design.  Working with Utzon, Rice’s engineers made the design constructible by rationalizing each of the shells as being cut from the same sphere, which allowed for a standard unit to be used in construction of the signature shells.  This inventive response provided an objective means to construct Utzon’s subjectively creative design.

Later, Rice worked with architects Richard Rogers and Renzo Piano early in the design of the famous Pompidou Centre in Paris, France.  The creative team did not really expect to win the competition, so the effort was treated as a chance to explore ideas.  Rice’s contribution can be seen in the exposed structural detailing of the project, particularly the gerberette and the double boom beam.

The architectural design called for long beam spans in both the interior exhibition spaces and the exterior circulation corridors. Long span trusses were designed to carry load to the exterior columns. In a conventional truss-to-column connection some amount of eccentricity, and therefore bending moment, is to be expected. Such bending would necessitate larger columns. Rice felt he had found a solution to the common problem. “To counteract the one-sided load on the columns, there are cantilevered bracket projections mounted on them, so called gerberettes, which, with the help of prestressed vertical stays, elicit an equal but opposite action in the columns.  Ideally, the final result is moment-free columns without large tensile stress, but with extra compressive stress added” (Eggen & Sandaker 1995). Rice described the design of the gerberette as an “architectural decision that only an engineer could make.” 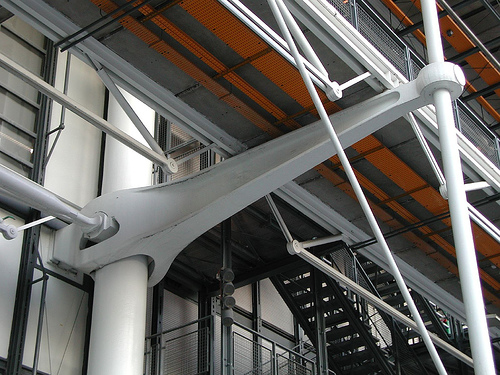 Similarly, the 45 meter-spanning double boom beams were engineered with aesthetics in mind.  Rice designed the beams with slender chords and diagonal members spaced so “light passing between the booms would lighten their visual impact very considerably, and that lightness was of vital importance to a beam spanning 45 meters and penetrating into the space.”

The choice of material was critical to forming the creative members. Rice specified cast steel, which had not been used since Victorian times, in part to give the structure a human feel and introduce a sense of scale.  He felt that the process of casting steel created a sort of relationship between the observer, the fabricator, and the designer.  As a result, the building feels to be at built to the scale of its pieces rather than the scale of the whole.

The success of the Pompidou project can be attributed to three things.  The two collaborating architects effectively communicated their design intentions to the engineering team and remained consistent throughout the design process. Second, the structural engineer put his imagination to work in designing special systems to achieve the architectural intent. Finally, the use of cast steel as a building material enabled the fabrication of these highly efficient members.

This extraordinary structure like the Sydney Opera House and Pompidou Centre are made possible by the right combination of architectural creativity and structural innovation. Peter Rice combined his understanding of physical behavior with a keen sense of building scale to help his architectural partners realize buildings that offer visitors a sense of interaction with the built environment. The example that Rice sets by his most enduring works is that engineers must be equally inventive as their architectural peers.