Convention a Launch Pad for ASCE Grand Challenge’s Next Phase 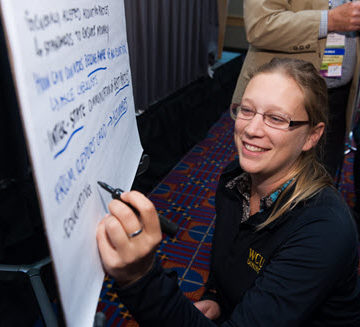 A session about the ASCE Grand Challenge at the 2016 Convention in Portland put attendees to work, brainstorming innovative solutions to infrastructure problems. PHOTO: Jim Tkatch for ASCE

Civil engineers around the world have begun taking a pledge to support the ASCE Grand Challenge and its goal of cutting infrastructure life-cycle costs in half by 2025.

The ASCE 2016 Convention, Sept. 28–Oct. 1 in Portland, OR, was an ideal venue for engineers of varying specialties to share ideas and strategies to achieve the goal.

“Seeing where we are as far as the funding goes and seeing where we’re headed with the cost of infrastructure, it all can seem too much,” said Sam Richmann, a Portland State University civil engineering student at the convention. “But I think with the Grand Challenge, ASCE has done a great job of saying, ‘Yeah, it’s scary, but we can do this.’”

A new ASCE Grand Challenge website is encouraging civil engineers to support the initiative by clicking an “I’m in!” button. While there, visitors can share relevant professional experiences, follow updates on outreach projects, and more.

“Innovation is interesting because one of the things is it sometimes takes a little bit longer to consider. Innovation doesn’t happen in that fast framework of things you’re familiar with in your routine,” said Kristie Dunkin, a managing director for the Chambers Group in Santa Ana, CA. “It happens in the times when you can sit back and think about something. One of the fundamental approaches is to give people some time to think about things.”

Convention events encouraged that space to think about innovation. Opening keynote speaker Frans Johansson talked about how diversity in people and ideas drives innovation, while closing speaker Gabie Figueroa outlined a similar form of intersection in her own career as a civil engineer and professional women’s hockey player.

“We have a great deal of fragmentation,” Moon said. “This divide-and-conquer mentality has broken apart a lot of different fields. I believe the history of this century is going to be about integration.” 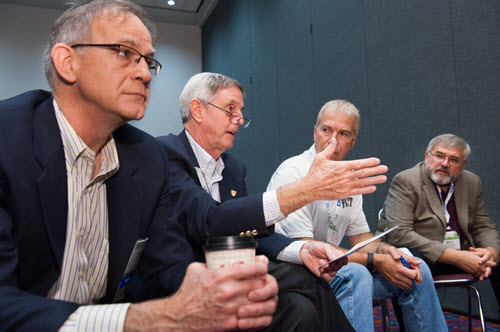 ASCE launched its second Innovation Contest on Sept. 1, and will be accepting submittals through March 1. Buckwalter and the ILC designed last year’s contest, which gave its winners the chance to present their ideas to top industry decision-makers.

“I think we’ll build on the great foundation that we laid with the first one,” said Buckwalter, who, with the ILC, developed the Innovation Contest patterned off a similar program he ran at his company. “We had a wide range of contestants, a wide range of ideas, and I really think the depth and quality of the concepts will be even better this time.”

Buckwalter said the important thing is not only having a great idea but articulating it well.

“The Innovation Contest is not the only component of getting to the Grand Challenge, but I really believe it’s a very important one because you have to be innovative,” he said. “You can’t just work things the way you did before. And the more we find ways to tease those out the better off we’ll be as an industry.”

Everything about the ASCE Grand Challenge is on a large scale.

A Grand Challenge session at the convention split attendees into groups to seek and apply innovative, big-picture approaches to solve hypothetical problems. Context and community were common threads in each group’s solution.

“The diversity needs to be a lot more than the individuals in the room or the engineers involved,” said Michael Scancarello, EIT, A.M.ASCE, a Younger Member who works as a structural engineer for Odeh Engineers in Providence, RI.