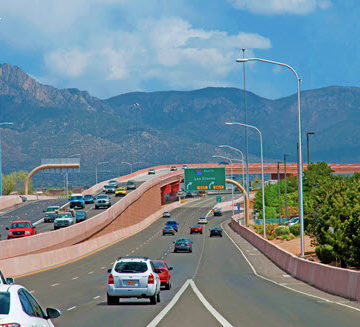 The residents of Albuquerque, NM, have long associated the roads near the Interstate 25/Paseo del Norte Interchange with traffic delays and lost time.

So it must be some kind of happy irony that the revamped interchange, headed by the New Mexico Department of Transportation, not only alleviated traffic concerns, but the project came in eight months ahead of its projected completion date.

“It was in the best interest of everyone to get it finished early,” said Sally Reeves, who served as the project’s manager and now works as the acting state construction engineer for NMDOT. “The commute time has really improved. A lot more traffic flows a whole lot better than it used to.”

The new I-25/Paseo del Norte Interchange is one of six projects to be honored as finalists for the 2016 ASCE Outstanding Civil Engineering Achievement Award.

The design-build team of Kiewit New Mexico and Bohannan Huston Inc. worked together from design through construction and finished the project in only 16 months, for only $75 million.

The team used 3D models to make the design and construction processes more efficient and less expensive. They stacked coping barrier walls between elements to maximize space in a particularly difficult stretch of I-25 where six different roadways merged at different elevations within 160 feet.

Teamwork played a key role throughout the construction, with weekly stakeholder meetings as well as new offices built for different groups all near the site.

“Constant meetings and interaction,” Reeves said. “We were within a quarter of a mile of one another. If we needed quick feedback we could get it.”

Anthony Lujan, deputy secretary for NMDOT, marveled at the level of cooperation from the various parties, whether it was the City of Albuquerque, county, state, and federal governments, or the construction teams.

“We had a great partnership,” Lujan said. “Without all those people it would not have been done as well as it was.”

ASCE’s annual OCEA Award honors projects that best illustrate superior civil engineering skills and represent a significant contribution to civil engineering progress and society. Honoring an overall project rather than an individual, the award celebrates the contributions of many engineers.