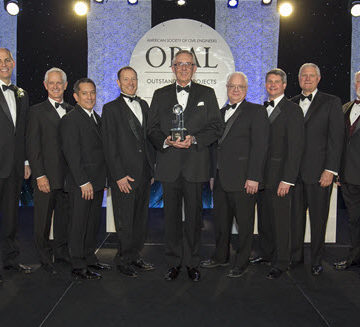 The team behind the Charles Pankow Award for Innovation winning design methodology. Photo by David Hathcox for ASCE

When the Seismic Design Methodology for Precast Concrete Diaphragms was announced as the winner of the 2016 Charles Pankow Award for Innovation at ASCE’s OPAL Awards Gala, the stage filled with people sharing the honor.

Entirely appropriate, as the project was a marvel of teamwork.

“I’ve written a lot of proposals with groups where the collaboration is tenuous. But we put together this team, and it was complete serendipity. We couldn’t have done this without all the parts coming together,” said Robert B. Fleischman, Ph.D., a professor of civil engineering and engineering mechanics at the University of Arizona who assembled the project team. “I loved doing this. I loved being with the people. It was just exactly the way research is supposed to be conducted.”

The issue at hand was the ability to use precast concrete in seismic regions – something that was not feasible following the collapse of nine precast concrete structures during the 1994 Northridge earthquake in California.

Having previously researched the topic with Richard Sause, Ph.D, P.E., M.ASCE, at Lehigh University, Fleischman assembled a plan when the Precast/Prestressed Concrete Institute launched a project to create an industry-endorsed methodology. Fleischman’s plan began a well-executed baton handoff of research work worthy of a world-class track and field relay team.

Sause and Clay Naito, P.E., M.ASCE, led one research team at Lehigh that ran hundreds of tests on the various connector pieces of the diaphragms.

“Inherently you have large components which are discretely connected,” Naito said. “The issue is if those little discrete connections are not designed appropriately, you could compromise the design construction.”

The Lehigh team noted its observations and sent its research to Fleischman’s team in Arizona, which looked at the response of the diaphragms based on these new connections and recommended a redesigned diaphragm.

Fleischman sent his redesign to Jose Restrepo, Ph.D., M.ASCE, at the University of California, San Diego. There, Restrepo and a talented group of graduate students put the diaphragm to the final and ultimate test – a three-story shake table with a foundation on a film of oil – to measure its seismic behavior.

“It’s probably to me the greatest engineering marvel in this entire process,” Fleischman said.

With a successful methodology developed, the final step was getting it codified. Restrepo’s work throughout the project to describe the diaphragm forces, along with collaboration from Roger Becker, P.E., M.ASCE, PCI, and industry liaison S.K. Ghosh, Ph.D., F.ASCE, F.SEI, helped make it happen. After three years of work, the methodology led to updated codes in ASCE 7-16.

“It’s rare. Most people, once the research funds go away, they go on to something else,” Fleischman said. “But everyone cared. PCI really stepped up. They hosted all these meetings. They really followed through. It was a success story from start to finish.”

Fleischman also credited the project’s 12-member industry panel and the many industry-side contributions. The National Science Foundation and the Charles Pankow Foundation helped fund the research as well.

Said Naito: “This procedure that we developed now allows you to use precast concrete design in all seismic regions. That provides opportunities to design some very innovative, high-quality, cost-effective structures in high-seismic zones.

“I find a lot of pleasure in working in research efforts that allow you to change how structures are built. We were able to identify some issues, figure out a way to solve them, and then get it codified. It’s very satisfying.”