Sharon L. Wood, Ph.D., P.E., F.ASCE, NAE, dean of the Cockrell School of Engineering at the University of Texas at Austin, has been honored by ASCE as the 2018 Outstanding Projects And Leaders award-winner in education.

The ASCE OPAL awards honor outstanding civil engineering leaders for their lifetime accomplishments. This year’s OPAL winners will be honored at the 2018 OPAL Gala, March 15, in Arlington, VA.

Wood leads a school with nearly 8,000 students and 280 faculty. Six of the Cockrell School’s graduate programs rank in U.S. News & World Report’s top 10 for 2017, with Civil Engineering at No. 2 and Environmental Engineering at No. 4. She has promoted project-based learning in the undergraduate curricula, launched a new 10-year strategic research plan, and initiated new B.S. programs in environmental engineering and computational engineering. In February 2016, over 6,000 K-12 students were drawn to the UT campus for Introduce a Girl to Engineering Day. Construction of the new Engineering and Education Research Center (the largest building on campus) was completed this fall.

Prior to this, Wood, as chair of the Department of Civil, Architectural, and Environmental Engineering, led a program with nearly 1,200 students, 56 faculty, and 20 staff members through a significant period of success, sustaining a high quality of teaching and research that has characterized the program nationally. She herself has supervised 57 M.S. and Ph.D. students throughout her career.

For ASCE/SEI, she has served on the Department Heads Council Executive Committee, as chair of the Task Committee on Accreditation of Structural Engineering Programs, and on several other committees. She also maintains a very heavy involvement in technical service activity. 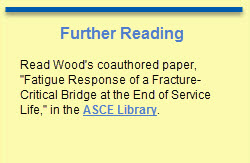 Wood is a past president of the American Concrete Institute and has held leadership positions on many administrative and technical committees. She has been a member of the Board of Directors of ACI, CUREE, NEES Consortium, and The Academy of Medicine, Engineering, and Science of Texas, also based in Austin. She served, too, on a number of major national advisory committees, including the U.S. Geological Survey, U.S. Department of Veterans Affairs, and National Earthquake Hazards Reduction Program.

Wood’s research on the seismic behavior and design of reinforced concrete shear walls led to changes in building codes for structural walls and diaphragms. She initiated a study of sensors to detect corrosion in reinforced concrete structures that received support from government agencies and industrial partners from the high-tech industry.

In 1993, she received the Alfred Noble Award from ASCE, and the following year she was recognized with the Director’s Award for Distinguished Public Service by the U.S. Army Construction Engineering Research Laboratory, Champaign, IL. Later this year, she will receive the Distinguished Alumna Award from the University of Virginia, where she obtained her B.S. She went on to earn her doctoral degree at the University of Illinois at Urbana-Champaign in 1986.