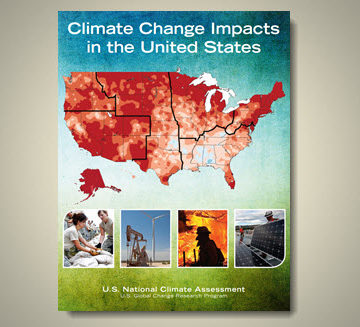 Released by the White House on May 6, the Third National Climate Assessment: Climate Change Impacts on the United States, assesses the science of climate change and its impacts across the nation today, and throughout this century.

What was once considered an issue of the far distant future, climate change, has been clearly stated by the Third National Climate Assessment as now meeting us in the present.

People from corn producers in Iowa, to coastal planners in Florida, to city dwellers in New York City, to Native Peoples on tribal lands are experiencing extreme changes to the climate around them. Summers are longer and hotter, rain comes in heavier downpours, allergy season is more severe and lengthy, and there is even a difference in the plant varieties that grow in people’s gardens.

More importantly, residents of coastal communities are seeing their properties and streets flood more regularly during storms and high tides, and inland residents are suffering from flooding from extreme downpours.

The Third National Climate Assessment: Climate Change Impacts on the United States, which was released by the White House on May 6, assesses the science of climate change and its impacts across the nation today, and throughout this century. It documents climate-change-related impacts and responses for various sectors and regions, with the goal of better informing public and private decision-makers—including civil engineers—at all levels.

A team of more than 300 experts guided by a 60-member National Climate Assessment and Development Advisory Committee (NCADAC)—which included ASCE Past President H.G. “Gerry” Schwartz Jr., Ph.D., P.E., Pres.02.M.ASCE—produced the full report, and are considered the largest and most diverse team yet to produce a U.S. climate assessment.

“The real bottom line across many hundreds of pages of the full report is: climate change is not a distant threat,” says John P. Holdren, Ph.D., assistant to the President for Science and Technology and director of the Office of Science and Technology Policy. “The key feature of this new report is the unprecedented comprehensiveness and detail with which it addresses how climate change is already affecting different regions in the U.S. and sectors of the economy and how it [is] expected to influence those regions and sectors going forward.”

“All Americans will find things that matter to them in this report,” added Jerry Melillo, Ph.D., chair of NCADAC and distinguished scientist at the Marine Biological Laboratory. “From impacts in their own regions to those elsewhere that affect the air that we breathe and our food, water, and energy supplies. We are all bearing the cost of increases in extreme heat, heavy downpours, and higher coastal storm surges.

“For decades we have been collecting the dots about climate change and now we have connected those dots.”

The report was extensively reviewed by the public and experts, including a panel of the National Academy of Sciences, the 13 federal agencies of the U.S. Global Change Research Program, the Federal Committee on Environment, Natural Resources, and Sustainability, and many stakeholder organizations, including ASCE.

“Every one of the thousands of comments we received to this report—including ASCE’s comments—were addressed in the National Climate Assessment,” says Schwartz, who was also a member of the team that produced the Second National Climate Assessment in 2009. “First and foremost what we are saying with this report is: climate change is not something to worry about in the future; it is already affecting the U.S. and the world for that matter, and that is important. Climate change is real.”

This Is Actionable Science

Schwartz noted that the scientists who study climate change confirm that observations of extremes in climate or weather events—such as hotter or drier weather in the summer, earlier snowmelt or wildfires in the west—are consistent with significant changes in Earth’s climatic trends. The 829-page report clearly states that long-term, independent records from weather stations, satellites, ocean buoys, tide gauges, and many other data sources all confirm that the U.S., like the rest of the world, is warming. Precipitation patterns are changing, sea level is rising, the oceans are becoming more acidic, and the frequency and intensity of some extreme weather events are increasing. It concludes that the many avenues of independent scientific evidence demonstrate that the rapid warming of the past half-century is due primarily to human activities.

“I would note that this is actionable science,” says John Podesta, counselor to the president. “Leaders from across the federal government along with hundreds of the top climate scientists from the public and private sectors have spent the past four years working tirelessly to make this report possible. The result is the most authoritative and comprehensive source of scientific information ever produced about how climate change is going to impact all regions of the U.S. and key sectors of the national economy.”

“Why is this report so important to civil engineers?” asked Schwartz, who was one of the two convening lead authors of the chapter of the report on transportation. “If you think about all these extreme events—flooding, precipitation, drought, fires, etc.—they affect the built infrastructure and that is what we as civil engineers do; we design and build the infrastructure. Civil engineers need to know that [climate change] is an important factor as we develop infrastructure systems—be they highways and bridges, water or wastewater plants, power lines and transmission line[or] buildings, ports, [and] harbors. Almost everything we touch can be impacted by these [extreme] events.  And then [we] need to ask: what are we going to do about it?

“Climate change needs to be consciously in that mix when we are doing planning for not only a new project but also rehabilitation, so that we can make the right decision. And that can mean to defend an old facility or to build more resilience into a new facility or in some cases to abandon a structure because it is not defendable in the long term. So, climate change is a very important factor for civil engineers to consider.”

One of the key chapters of this report as it pertains to civil engineers is Sustained Assessment: A New Vision for Future U.S Assessment, which focuses on the goal of anticipating, mitigating, and adapting to the impacts of climate change. The report believes that this sustained assessment process will—with the help of civil engineers—lead to better outcomes for the people of the U.S. by providing more relevant, comprehensible, and usable knowledge to guide decisions re­lated to climate change at local, regional, and national scales.

“One of the big problems that we have as civil engineers is trying to convince the general public and our clients that they need to pay attention to these issues,” says Richard N. Wright, Dist.M.ASCE, vice chair of ASCE’s Committee on Adaptation to a Changing Climate. “And I think the National Climate Assessment is very strong effort directed at the general public and policy makers saying, climate change is here and [civil engineers] have to manage it. And that management will include both adaptation efforts and mitigation efforts.

“I believe that the civil engineering community worldwide will have a major role to play in the mitigation of and adaptation to climate change, but it has much work to do in terms of research, development of improved practices and standards, and education of practicing and future engineers to prepare to implement its roles.”

As stated in its review comments, ASCE is already working on many of these mitigation and adaptation issues. ASCE Policy 360 says that the Society is working for adaptation to climate change and Policies 418 and 488 say the Society wants to work for sustainability and  the reduction of greenhouse gases.

“ASCE has its policies aligned and I think that is a very important point,” says Wright.

Key Findings of the Report

Both Schwartz and Wright agree that the role of civil engineers and ASCE in Sustained Assessment is involvement in the planning, design, construction, operation, and maintenance of physical infrastructures. These infrastructures include buildings of all types, communications facilities, energy generation and distribution, industrial facilities, transportation of all modes, water resource facilities, and urban water systems. Their construction and use must support reductions of the greenhouse gas emissions that drive climate change, and they must adapt to climate change to remain functional, durable, and safe for long service lives, typically 50 to more than 100 years.

Most of the 12 key findings of this report are relevant to civil engineers:

1. Global climate is changing and this is apparent across the U.S. in a wide range of observations. The global warming of the past 50 years is primarily due to human activities, predominantly the burning of fossil fuels.

2. Some extreme weather and climate events have increased in recent decades, and new and stronger evidence confirms that some of these increases are related to human activities.

3. Human-induced climate change is projected to continue, and it will accelerate significantly if global emissions of heat-trapping gases continue to increase.

4. Impacts related to climate change are already evident in many sectors and are expected to become increasingly disruptive across the nation throughout this century and beyond.

5. Climate change threatens human health and well-being in many ways, including through more extreme weather events and wildfire, decreased air quality, and diseases transmitted by insects, food, and water.

6. Infrastructure is being damaged by sea level rise, heavy downpours, and extreme heat; damages are projected to increase with continued climate change.

7. Water quality and water supply reliability are jeopardized by climate change in a variety of ways that affect ecosystems and livelihoods.

8. Climate disruptions to agriculture have been increasing and are projected to become more severe over this century.

10. Ecosystems and the benefits they provide to society are being affected by climate change. The capacity of ecosystems to buffer the impacts of extreme events like fires, floods, and severe storms is being overwhelmed.

12. Planning for adaptation (to address and prepare for impacts) and mitigation (to reduce future climate change, for example by cutting emissions) is becoming more widespread, but current implementation efforts are insufficient to avoid increasingly negative social, environmental, and economic consequences.