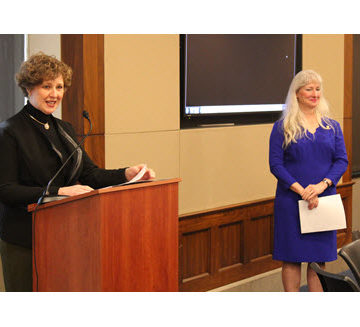 Rep. Susan Brooks (R-IN) speaks at an event on Capitol Hill to promote Introduce a Girl to Engineering Day, as ASCE President Norma Jean Mattei, the event’s emcee, looks on.

The numbers aren’t there yet, but ASCE’s 2017 President Norma Jean Mattei is optimistic that the change is gonna come.

“Just the ability of a young girl to see someone who looks like her, who raises her family the way maybe she hopes to raise her family someday, and who is in a job as a woman engineer that she finds fulfilling, is so important,” said Mattei, Ph.D., P.E., F.SEI, F.ASCE, discussing the gender gap in civil engineering during a recent event to promote DiscoverE’s Introduce a Girl to Engineering Day in Washington, DC.

“But as more and more women continue to join the engineering workforce, we’ll see more girls follow suit because they’ll see someone who looks just like them doing it.”

Introduce a Girl to Engineering Day is Thursday, Feb. 23. Often known simply as Girl Day, the initiative strives to introduce girls around the world to engineering through a variety of activities, events, and role models. It’s a hallmark of DiscoverE’s annual Engineers Week, this year co-chaired by ASCE.

Mattei is a terrific example of a Girl Day engineering role model, having enjoyed a successful career as a practitioner, educator, and presidential appointee while also inspiring two daughters to pursue engineering careers of their own.

“I think as a profession we’re getting smarter in when and how we interact with kids, talking to them earlier and also emphasizing that engineers really do in their day-to-day jobs make the world a better place for people,” Mattei said. “I think that really appeals to a lot of people, but to girls especially.”

Mattei hosted the Girl Day briefing, Feb. 15, at the Rayburn House Office Building on Capitol Hill, bringing together a wide range of speakers, from elected officials to students to civil engineers featured in the new IMAX film Dream Big: Engineering Our World.

Five members of the House of Representatives, including ASCE Fellow Rep. David McKinley (R-WV), P.E., spoke about the value of engineering and the importance of inspiring more women to join the profession.

Menzer Pehlivan, Ph.D., P.E., M.ASCE, one of the featured civil engineers in the Dream Big film, spoke of the support she received from her family when, as a child in Turkey, she was discouraged from pursuing what was thought to be “man’s work.”

“I thought, ‘Wait a minute, I’m the one of the best students in this class, why can’t I be a civil engineer?’” Pehlivan said. “Because I grew up with that mentality that I can do anything. I was lucky enough to have that from my family. My mother and my grandfather were very supportive. They believed in me so much.

“And that’s an important message we need to bring to girls, so that they will not think, ‘Oh, STEM is not for me. Engineering is not for me.’ It is important we change the public image of engineering so that no other teacher goes to a little girl and says that she can not or should not be an engineer.”

Learn more about DiscoverE Introduce a Girl to Engineering Day and how you can get involved.