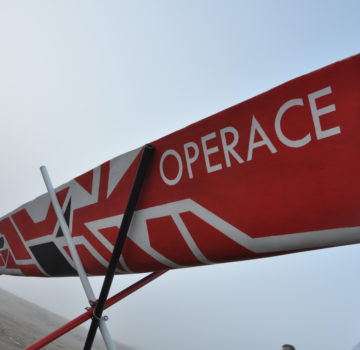 The students on the Tongji University concrete canoe team named their canoe, Operace, to symbolized Chinese culture and the spirit of being a formidable competitor in the races. Photo Credit: Zhaoqi Huang

When the students from the Tongji University were thinking about what to name their newly built concrete canoe, they wanted it to not only symbolize Chinese culture but also capture the spirit of being a formidable competitor in the ASCE National Concrete Canoe Competition. The name they chose? Operace.

“We named our canoe with the combination of the words ‘opera and ‘race’,” explained Zhaoqi “Victor” Huang, S.M.ASCE, student project manager of the Tongji University College of Engineering Concrete Canoe team. “Chinese opera, one of the most famous symbols of Chinese culture, was chosen as [the] theme of our canoe this year. Actors on stages must cooperate with each other to give a dynamic presentation. Cooperation has always remained a key point in Tongji’s motto. It is the trait that drives the 2014 Tongji Concrete Canoe Team.”

It’s been more than 30 years since ASCE student chapters first started informal intramural concrete canoe competitions. Since then, the ASCE National Concrete Canoe Competition (NCCC) has become one of the premiere collegiate events showcasing team spirit and engineering excellence. Successful competitors must construct water-worthy canoes developed from an advanced form of concrete construction, and prove their engineering and athletic prowess in a series of races.

The 2014 National Concrete Canoe Competition, which will take place this year June 18-21 at the University of Pittsburgh at Johnston, marks the first time a team from outside the Western Hemisphere could take home the top prize in what has become known as the “America’s Cup of Civil Engineering.”

“We feel more than honored to be involved in the National Concrete Canoe Competition,” says Huang. “This is only the second time that we have competed in the concrete canoe competition since 2013 and yet we were ranked second in the Mid-Pac [Mid-Pacific Regional] Conference in April and got a chance to go to the national competition. A year of hard work and dedication finally paid off and we hold the belief that we stand the chance to put ourselves in the position to win Concrete Canoe.”

A Milestone in the History of Tongji Concrete Canoe Team

“The students were very diligent and smart. I encouraged team members to be proud of themselves overcoming the many difficulties as well as [to] have fun and develop friendship during their work,” stressed Haibei Xiong, Ph.D., A.M.ASCE, faculty advisor to the concrete canoe team, and professor and vice dean at the Tongji University College of Civil Engineering. Photo Credit: Zhaoqi Huang

Because the winning team at the Mid-Pac Regionals, the University of Nevada, Reno, finished in the top 5 in the NCCC last year, the rules permit the second-place finisher to compete in the nationals as well, thereby opening up a spot for the Tongji team.

“Zhaoqi gave me a call near midnight as I was in Shanghai. He told me they were going to the NCCC,” Xiong recalled. “I listened and congratulated him almost in tears. It is just like a dream come true. They did it and they deserved it.”

“It had gone far beyond our imagination to hear that we were ranked the second and thus qualified for the national competition; it surprised every one of us and we burst into cheers,” recalled Huang, whose team has 30 members made up of both male and female students. “We felt lucky enough to have the chance to compete with some formidable and powerful competitors in Mid-Pac Regionals, like the University of Nevada, Reno, and the University of California, Berkeley.

“We came from China to learn, not only compete. [Coming to the NCCC] will be a milestone in the history of Tongji Concrete Canoe Team.”

No Doubt the Greatest Challenge

It took the team from Tongji University about 2 months to ship the canoe from China to the US, which greatly shortened its casting and finishing. Photo Credit: Zhaoqi Huang

While most concrete canoe teams wrestle with the problem of design, construction, and racing, the Tongji University team faced a much more daunting challenge: namely shipping their canoe to the U.S.

“That was no doubt the greatest challenge we had to face as an international team, and three aspects of the problem remained for us,” noted Huang. “First, it took us about two months to ship the canoe from China to the U.S., which greatly shortened our casting and finishing. And it made it much more difficult for me as the project manager to keep on our settled time schedule.

“Secondly, the expense of canoe shipment made up a large portion of our funds. Since the raised money is settled and far from enough, the high cost of the shipment forced us to closely monitor the budget and to cast a higher-quality canoe with less money, which strongly challenged the team manager and members from the project start to the end.

“Thirdly, canoe safety has always remained a top priority. Too many unknown factors may result in damage [to] our canoe during the two-month shipping process across the Pacific Ocean. So we had to guarantee our canoe strength largely surpassed its requirement during races and to make sure that it [was] more than well-protected during the shipment.”

Xiong says that in order to compete in the Mid-Pac and in the NCCC, the Tongji concrete canoe team had to raise approximately $50,000 in traveling expenses to the U.S., 3,000 for canoe casting, and another 17,000 to ship the canoe from China to the U.S. While the team is supported by the university, they are trying to cover all their expenses by seeking private sponsors.

The second-biggest challenge was inexperience.

“Many [concrete canoe] teams have been doing this project for several years, yet it is only our second official canoe that we would be casting,”  Huang says. “There remained many problems that needed to be solved, and we are relatively inexperienced. We set goals to cast a special canoe that [could] best present us, yet it was hard for us to know how the other teams cast their canoes. So to find the best way to make a really special canoe confused us at the very beginning.”

We Are Proud of Our Construction Techniques

Based on their experience competing at the Mid-Pac Regionals in 2013, the Tongji team was able to overcome their many logistical problems by doing in-depth research on hull shapes and conducting a structural analysis. The team also formed relationships and communicated with other concrete canoe teams they had met in 2013 to learn how they designed and built their canoes.

The lake where the Tongji University concrete canoe team trained at was about 90 minutes from the school, which only allowed the team to train there twice a week. Instead, team members did physical exercises to train themselves. Photo Credit: Zhaoqi Huang

“We adapted a totally different casting system compared with last year’s canoe,” says Huang. “We made a specially designed, hybrid mold all by ourselves, which raised our thickness control skill to a much higher level. We poured the mixes, instead of placing them on the mold surface, [and it] only took three hours to finish the canoe on casting day. Also, a pre-stressing system was developed to aid the pouring system.

“We are proud of our construction techniques [for] our 2014 canoe.”

This left the team with their third problem, figuring out how to train to race their canoe.

“Training for our team members is somewhat difficult since we have to travel 30 miles to the lake where we practice our paddling skills and it takes about an hour and a half for the school bus to get there,” Huang recalled. “Because of the long distance between the lake and our campus, we could only receive training twice a week there with our canoe. So [to compensate], we arranged our physical training on our campus every other day to build our muscles without the canoe.”

“The students were very diligent and smart,” says Xiong. “I encouraged team members to be proud of themselves overcoming the many difficulties as well as to have fun and develop friendship during their work.”

Established in 1914, the College of Civil Engineering at Tongji University is now celebrating its 100th anniversary. The university itself was founded in 1907 when the German Medical School for the Chinese in Shanghai was founded by the German government along with physicians Erich Paulun, Oscar von Schab, and Paul Krieg.

“The civil engineering program at Tongji University [has been] ranked as one of the top in China for more than ten years,” says Xiong. “With around 270 excellent faculties and a total of 5,000 undergrad and graduate students, the…program at Tongji is a biggest-and-best program in China.”

Tongji University’s participation in concrete canoe and other competitions began in 2006, when Z. John Ma, Ph.D., P.E., M.ASCE, a faculty advisor for the ASCE Student Chapter at the University of Tennessee, Knoxville (UTK), introduced the activity when he visited the school. He invited students as a guest team to attend the 2007 Southeast ASCE student conference hosted by UTK. Since then, Tongji University has participated in the conference every year. In 2011, Tongji officially enrolled in the Mid-Pac Conference and its steel bridge team made it all the way to the ASCE/AISC National Student Steel Bridge Competition finals in 2012.

“The idea of establishing a concrete canoe team first hit us in 2009 as we found it would be a pity not to take part in the most challenging competition,” says Huang. “The reason it was not immediately established was the unknown shipping process from China to the USA. But we finally made up our minds and established the concrete canoe team in January 2012 and our first canoe, China, competed at the Mid-Pac Conference in April 2013.”

After earning a spot in the NCCC, there was some very serious discussion at Tongji University as to whether the school could afford to send the 10 students back to the U.S.

“After talking the matter over with university officials, we decided that the team should go to the NCCC, because it was a good opportunity for them to learn, communicate, and to compete,” says Xiong.

“Our team members have only this one chance to compete on the international stage,” concludes Huang. “The opportunity to take part in the concrete canoe competition is so valuable that we will give it our best shot and will leave chance to others. We learned from our 2013 team members. We would never make it to nationals this year without the dedication of the 2013 team members.

“Challenges will make the strong even stronger. All our team members are encouraged to challenge themselves with concrete canoe, and therefore show their best.