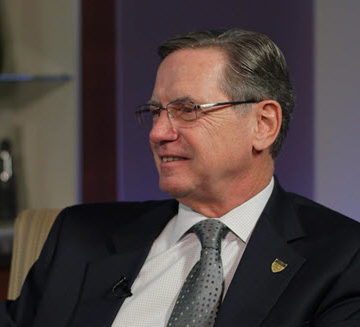 After a long and successful career in both the public and nonprofit sectors, executive director Pat Natale will be retiring at the end of this month. Before he leaves the Society where he has served for a dozen years, Pat agreed to sit down for a video interview (see video below) with Senior Managing Director Casey Dinges and share some of his thoughts on what it takes to reach his kind of leadership success.

After working for a corporate utility in New Jersey and serving on many different boards on a volunteer basis, Pat feels that both experiences were especially helpful when he moved to the nonprofit world. “Especially when I transitioned to the not-for-profit side, I understood the motivators on the for-profit side but also the values side.” After stepping down from his role as President of NJSPE, his supervisor at Public Service Electric & Gas Company told him that he was a better manager than ever before because of that volunteer experience. As Pat said “What you’re trying in a volunteer role, you can go back and use in a real job and it works well. It teaches leadership.”

As a tribute to his dedicated service, ASCE hosted two farewell celebrations for Pat.  At an evening Capitol Hill reception, leaders of Congress, the Administration, industry and the association community honored Natale for his leadership in increasing ASCE’s visibility as the voice of infrastructure both in Washington and across the nation. Among those attending were: Rep. Earl Blumenauer [D-Oregon], Deputy Secretary of Transportation Victor Mendez, and leaders from the U.S. Army Corps of Engineers, American Road and Transportation Builders Association, Associated General Contractors of America, National Society of Professional Engineers, American Public Works Association, and Parsons Brinkerhoff.

Back at the Reston headquarters the next day, Pat and his wife Sheila were thanked by the staff. Opening the celebration, Tom Smith, ASCE’s current general counsel and next executive director said, “I’d like to take a few moments to say a few words about how much Pat has meant to all of us—he’s been a mentor, a friend, a colleague and a role model as a leader. During his 12 years at ASCE, much has been accomplished.” Noting just a few of the many highlights from Pat’s career here, Tom included “publication of the Body of Knowledge, establishment of both Transportation and Development Institute and Engineering Mechanics Institutes, creation of the Institute for Sustainable Infrastructure and Envision rating tool, recognition of ASCE’s headquarters as a LEED Gold certified building, and development of the Dream Big! IMAX movie project.”

Although he is stepping down, Pat has plans to stay very busy. He will continue to be involved as a volunteer serving on the United Engineering Foundation board.  He will continue his ASCE engagement supporting the IMAX movie development. And his newest adventure will be working part-time at Hatch Mott McDonald in New Jersey as their Vice President of Business Strategy.

Watch the extended version of Pat’s interview with Casey for more reflections on leadership.