Best of Concrete Canoe on Display as 2017 Nationals Begin 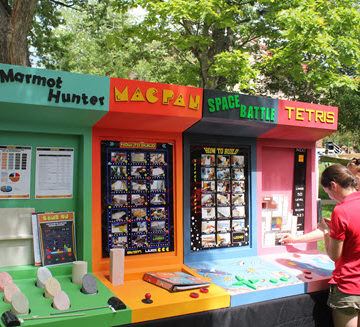 The ETS team puts the finishing touches on its arcade game display.

The 2017 National Concrete Canoe Competition began Saturday with a nod to its past, specifically the late R. John Craig – a professor at New Jersey Institute of Technology whose passion for both teaching and canoeing led him to organize the very first national concrete canoe event back in 1988. Sadly, he died of a brain tumor at 44, just months before that inaugural event.

Thirty years later, a dozen of John’s family members were on hand to witness his legacy as ASCE student concrete canoe teams from around the world gathered at the Colorado School of Mines in Golden, CO, for the event affectionately known as the America’s Cup of Civil Engineering.

“We’re sure that John has been smiling down on this for 30 years, and he would think this is just out of this world,” said Chris Fossett, John’s sister. “He just would be so pleased.”

Here’s a quick look at some Display Day highlights:

The Display Day format, with all 20 teams setting up their final products side-by-side, provides students with the opportunity to walk around and assess the competition.

But more than that it’s a chance to talk to their concrete canoe peers, trade ideas about mix proportions, and take notes about new strategies.

“It’s just nice being in an environment where you’re surrounded by like-minded people who want to learn,” said Kane Schonauer, S.M.ASCE, of the University of Akron. 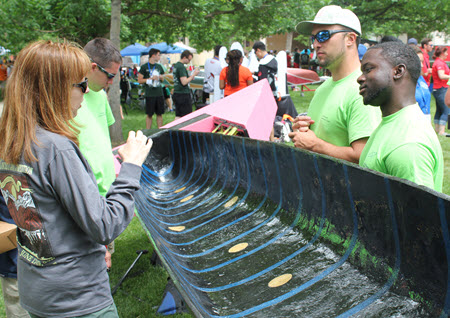 Members of The Citadel concrete canoe team, right, discuss their design with other attendees.

Zhaoqi Huang, whose Tongji University team came all the way to Colorado from Shanghai, China, literally took a notebook with him as he admired the different canoes and displays.

“There are different things,” Huang said. “The Chinese style and American style are totally different. We each come up with different ideas, naturally. So it will be very beneficial for us to mix in some of these ideas, and in that way make great progress next year.”

“Next year” is this year for the South Dakota School of Mines. The team qualified for nationals last year for the first time in a decade, using the trip as a great learning experience to prepare for an even better canoe this year.

“It was a big thing last year for us, so we’re hoping to use all the information we gained then to become more of a competitor,” said senior Zach Hansen, S.M.ASCE. “Last year we just went around and saw what worked for all the teams. We tried to incorporate that into what we did.

“We made two canoes this year. That’s something we’ve never done before. To have a prototype, something we could get out on the water, really helped. We’re just trying to keep moving up.”

Each year, the Concrete Canoe Committee alters the rules and regulations for the competition to keep teams from repeating themselves. This year, teams had to use a minimum of 25 percent nonglass microspheres in their aggregate, after judges had noted many schools relying heavily on glass microsphere mixes in recent competitions.

“We’re seeing quite a bit of struggle with the rules change on the aggregate requirements,” said Edward Stafford, P.E., PTOE, F.ASCE, past chair of the committee, with 18 years of national concrete canoe experience. “Some teams have mastered that; other teams still have a lot of learning to do. And it has impacted what some of them were planning to do with the canoes this year.

“It’s caused them to go back and reanalyze their mix designs and learn more about concrete and not just repeat what’s been successful for their past teammates. So we’re actually very pleased with where it’s gone, in terms of pushing some new thoughts and having to work with some new materials.”

Overall, Stafford liked what he saw in the crop of 2017 canoes: “As always, an impressive group. Some schools have shown up even stronger this year than in the past. We’ve seen a lot of learning has occurred between last year and this year with some teams.” 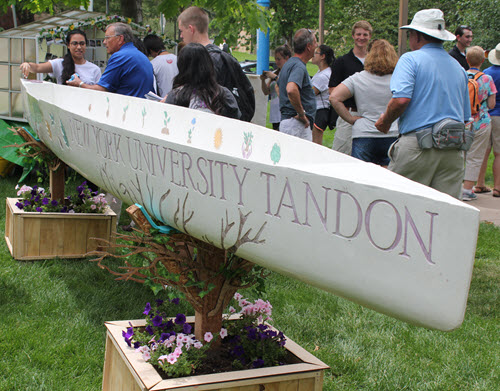 The NYU Tandon team incorporate real flowers into its display.

The schools with arguably last year’s most memorable displays – École de technologie supérieure’s LEGO display and The Citadel’s Star Wars theme – were back in 2017 with even more ambitious, creative ideas. Both, oddly enough, boasted some retro ’80s flair. 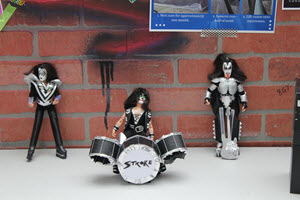 The Citadel “Stroke” canoe rocks out.

“We’re a military school, so were kind of perceived as straightforward, straight-laced,” said Citadel student Greg Williamson, S.M.ASCE. “So we wanted to kind of show that we have a little pizzazz, you know?”

“Do something off the wall, that everyone kind of gets behind,” added teammate Alex Overeem, S.M.ASCE.

The ÉTS “Game On” canoe, meanwhile, was a popular hub all day for students and fans, interested in checking out the colorful display of four throwback arcade games.

“We wanted a simple idea. Last year it was very simple to see our team. We went with the same idea, a concept that was very noticeable. Arcade was colorful with simple kinds of shapes like last year,” said ÉTS senior Gabriel Beauchemin, S.M.ASCE. The LET’S GO Lego canoe earned ÉTS first place in 2016.

“We wanted to step up this year and try to keep our place at the top,” Beauchemin said. “Last year was an amazing canoe, but this year, we think, is good too. We’re confident.”

The University of Florida’s ninth-place finish last year did not sit well with the team; not after the Gators won the national championship in 2015. So their captains brought that first-place trophy to every meeting this year.

“Finishing ninth gave us more motivation to come back even stronger and work even harder,” said Casey Cook, S.M.ASCE, construction captain. “Every single captain came into every single meeting saying this is what we want, we want to win.”

Kevin Carabeo, S.M.ASCE, project manager, was a member of the 2015 title team.

“I think it was important to consistently remind our members why we’re doing this,” he said. “It’s to take away an experience that will help us in the real world when we’re practicing engineers. But at the same time, we want to do well and represent the University of Florida the best way possible.” 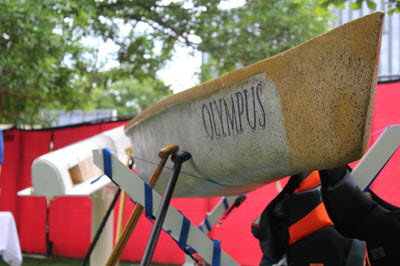 “We wanted to keep the experience going and teach our new members,” Andrée Plasse, S.M.ASCE, said. “We had a lot of people who graduated last year who were key in the management. I think we did a really good job of teaching the next generation.

“We didn’t want to rest on our accomplishments, so we really tried to push the envelope with our concrete testing and try some new stuff with our stands and our displays.

“Competition to us is also about friendships and relationships and all the things we learn.”

But first place would be nice?

“Well, that is why we drove three days to come here,” laughed captain Valérie Duchaeme, S.M.ASCE. 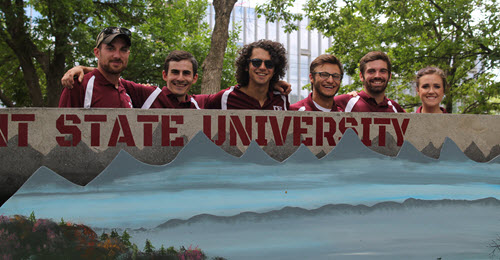 Members of the Fairmont State University stand behind their “Mountain Mama” canoe.

It’s getting so the NCCC just isn’t the NCCC without Fairmont State University. The West Virginia school has qualified for nationals the last 14 years. 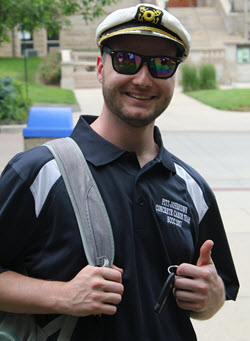 Every concrete canoe team has a captain. But Pitt-Johnstown has a CAPTAIN.

What’s in a name?

Quite a lot for the team from the University of Pittsburgh at Johnstown and its canoe, “Redemption.”

Pitt-Johnstown qualified for nationals from 2009 through 2013. The team hosted in 2014 but then suffered back-to-back disappointing showings, including last year’s canoe, which broke during the second race at regionals.

“This is our redemption,” said sophomore assistant project manager Justin Towsey, S.M.ASCE. “We’re hoping to learn a lot. That’s the biggest thing – see what we can do to advance UPJ Concrete Canoe.”

Cliché as it may sound, learning really is the central component of concrete canoe.

More than 200 teams begin the school year working out plans for their canoes. Only the 20 best advance to Golden, CO. And just one will take home the trophy Monday night at the awards banquet.

But every single student learns invaluable skills along the way.

“I feel like it’s a really important learning experience,” said Naiara Ledezma, team member for the University of Texas, Austin squad that has earned national berths in back-to-back years. “Maybe you won’t have to work with concrete in the workforce, but you learn a lot of things while working on canoe. Even if it’s just problem solving like how to handle the stress of ‘We have to finish this tonight!’ or ‘This isn’t working, what is going on?’

“I feel like it’s a very important learning experience. A lot of our team members who come out of concrete canoe have definitely been prepared for life.”