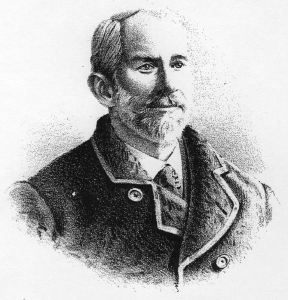 Berthoud as mayor of Golden, Colorado

The town of Berthoud, Colorado, about 45 miles north of Denver, is one of several notable landmarks named for Edward L. Berthoud, a railroad engineer who in 1877 located the Colorado Central Railroad in the area. The city was originally called Little Thompson, given its location on the Little Thompson River.

Berthoud was born in Geneva, Switzerland, on March 29, 1828. He came to the U.S. in 1830 with his parents and spent his childhood along the Mohawk River and in Oneida County, in Upstate New York. Berthoud graduated with a degree in civil engineering from Union College in 1849, one of the earliest graduates in a program that had only started in 1845 under Prof. William Gillespie. In the early 1850s Berthoud worked as a surveyor on the Panama Railroad. In 1860, during the Colorado Gold Rush, he and his wife, Helen, settled in the western part of the territory in the new town of Golden.

In 1861, in an effort to establish a more direct route from Denver to Salt Lake City, Berthoud surveyed the first road to Middle Park and discovered and surveyed, with Jim Bridger, the pass across the Continental Divide at elevation 11,307 ft. That pass, on the current route of U.S. Highway 40, now bears Berthoud’s name. (Berthoud also named Vasquez Peak.) In 1862, after the outbreak of the American Civil War, he volunteered for the Union Army and received a commission in the 2nd Colorado Volunteer Infantry, reaching the rank of captain.

Berthoud died in Golden, Colorado, in 1910. His tombstone calls him “Explorer, Soldier, Scientist.” The Colorado School of Mines in Golden dedicated Berthoud Hall in his honor in 1940.