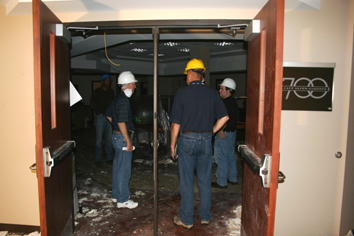 ASCE/SEI sent an 8-member team to Moore, Oklahoma, to investigate “critical facilities” that either resisted or suffered significant damage from the estimated 200+ mph tornado winds, including failures of long-span roof structures. Team members examine a safe area in the Moore Medical Center that was severely damaged by the tornado that struck the community on May 22. William L. Coulbourne

Eight days after an EF5 tornado struck Moore, Oklahoma, an 8-member team from ASCE’s Structural Engineering Institute (SEI) visited the area to assess the performance of “critical facilities” that either resisted or suffered significant damage from the estimated 200+ mph winds. The team studied 4 elementary schools and a hospital, and also examined the failures of long-span roof structures.

The information gathered from the reconnaissance team, which was in Moore for 2 days, will be used to further inform the ASCE 7 Wind Load Task Committee about additional work that should be included in the proposed ASCE 7-16 Commentary on tornado design. The team will also write an ASCE/SEI report focusing on the performance of the studied structures, and the Applied Technical Council plans to write a guide on tornado wind design. The team focused on 2 specific recommendations made in the ASCE/SEI report (Structural Damage Survey and Case for Tornado-Resilient Building Codes) dealing with the tornado that devastated Joplin, Missouri, on May 22, 2011.

The team was led by William L. Coulbourne, P.E., F.SEI, M.ASCE, who was also a member of the 2011 ASCE Joplin reconnaissance team.

“Primarily, we went to Moore, Oklahoma to do a follow up and get a more in-depth look and information about a couple of things that we saw two years ago in Joplin, Missouri,” explained Coulbourne. “And, certainly, looking at several critical facilities affected by the tornado, such as schools, hospitals, big box retailers, and police stations, how from an engineering standpoint, we can come up with ideas of how to retrofit existing buildings.

“Our primary mission was to examine space inside of those existing building[s] to see how [they] kept people safe, and secondly, to look at the failure of long-span roof structures, which because of their poor performance under tornadic loading conditions, present a significant threat to public safety.”

FEMA arranged for the team to get into the Moore Medical Center and meet with the facilities director. Coulbourne and the team found that while there was no apparent damage to the structural system of the building, the cladding took a severe hit from the tornado, leading to the eventual demolition and probable reconstruction of the hospital.

“When the tornado stuck, there were about 80 people in the Moore Medical Center, including 50 members of the medical staff and 30 patients,” says Coulbourne, who is director of Wind and Flood Hazard Mitigation at the Rehoboth Beach, Delaware, office of the Applied Technology Council. “In addition, there were another 210 or 220 people who came from the surrounding neighborhoods looking for safe shelter, so they had this huge influx of people coming into the hospital thinking that it was a safe place.

“There is a cafeteria buried deep on the first floor of the two-story building that they used as their safe space; there was no exterior wall and it was protected by a concrete floor above them. I am not sure what we would do about design, but the issue that the team is going to talk about is creating safe places in existing buildings similar to what the medical center did.”

What the Team Discovered in the Elementary Schools

Coulbourne says that they found the Apple Creek and Kelly Elementary Schools were good examples of how 2 similar structures fared during the tornado.

“Kelly Elementary School was totally demolished after the 1999 tornado, and they rebuilt it on the same footprint and followed the outline in the layout of the old school,” says Coulbourne, whose team was in Moore when the second tornado hit on May 31. “There are potential issues with the way that was reconstructed, and I think we need to look at some improvements that were done even from the Kelly design.

“We talked to the principal at Apple Creek Elementary School and got some excellent information about how they handled the disaster. Then, we looked at their gymnasium, which was exactly like the gymnasium that got damaged at Highland East Junior High School, so we were able to examine how each of the buildings fared during a high wind.

“I do think we have some really interesting and doable ideas about how to retrofit existing school buildings, mostly through hardening the corridors of those schools in a way that would create for them a really safe haven inside the school.”

While the team was unable to examine the Warren World Class IMAX Theater because of access issues, Coulbourne says that several of the local ASCE/SEI team members will do a follow-up investigation in the coming weeks.

“We basically concluded that the tornado did not directly hit the building and that is probably one of the reasons why it survived,” says Coulbourne. “But some of our local team members [Joyce and Shafer] are going to look at the structural system to see what we can find out about the building.”

“I believe that this was a really worthwhile, focused mission that we completed in two days,” concluded Coulbourne. “It builds on information that we learned in Joplin and learned from other tornadoes. So I think the collective result of all this will hopefully allow ASCE/SEI to produce some valid reports that will ultimately provide a blueprint for the construction and/or reconstruction of future critical facilities in the U.S. and will provide useful information to the updating of the wind design provisions of ASCE 7-16.”

For a limited time, ASCE is granting free access to a selection of relevant technical papers from journals and conferences. These papers cover ways to rebuild with greater resiliency after a tornado, reducing the potential loss of life and property in a future strike. The papers are free to registered users and subscribers of the ASCE Library through July 31. Also available for a fee is the ASCE/SEI report Structural Damage Survey and Case for Tornado-Resilient Building Codes, which provided the backdrop for the reconnaissance mission to Moore, Oklahoma.