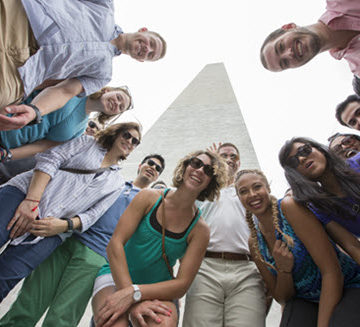 Challenging your mother’s advice is never a sound idea. Her advice to never ride your bike in the middle of the road or to drink from a mud puddle saved you a trip or two to the doctor’s office. But engineers have grown up challenging conventional thinking, and as a group of ASCE Younger Member leaders saw, two sustainable infrastructure projects in Washington, D.C., challenge mom’s common sense.

While in the nation’s capital region for the 2016 Younger Member Leadership Symposium at ASCE headquarters, the leaders toured Pennsylvania Avenue’s bike lanes and the Fort Reno Green Roof Reservoir.

“It’s always interesting to see how projects transform and how engineers need to think outside of the box in order to accommodate unexpected situations,” said Kiana Negoro, EIT, A.M. ASCE, a Younger Member from the Fresno Branch.

Amid the commotion of downtown D.C., Pennsylvania Avenue’s bike lanes run down the middle of two four-lane roadways. The tour of the project was led by Jeremy Chrzan of Toole Design Group, which served as the lanes’ lead designer, completing the project in 2010.

The lanes’ design makes novel use of bicycle signal heads, pavement coloration and other innovations. Initially, the project design presented challenges as many motorists and bikers struggled to adapt to the unique conditions. Bikers were at risk due to illegal U-turns by motorists. This was coupled with the inherent challenge of ensuring the safety of pedestrians crossing the street to avoid collisions with oncoming bikers. 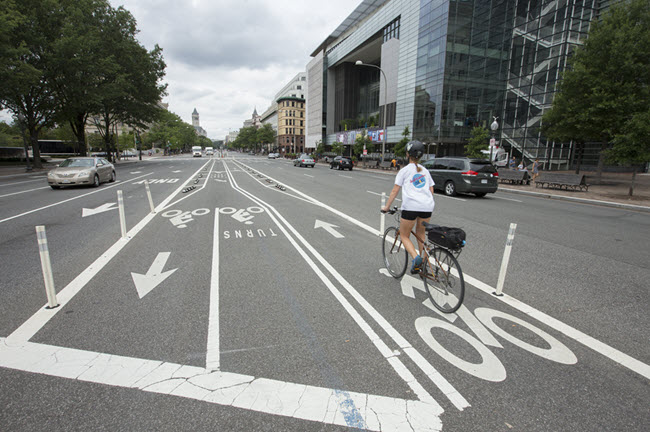 “I thought it was interesting how they went through many different iterations of devices to delineate the bike lane from the traveled lane since cars were trying to make U-turns through the bike lane,” Negoro said.

Also on the trip was a look at D.C.’s most essential utility, its drinking water.

Perched atop one of the city’s highest points, DC Water’s Fort Reno Reservoir Green Roof is one of the most integral green infrastructure facilities in the area. The reservoir holds 5.8 million gallons of drinking water that is distributed to more than 600,000 homes and businesses. 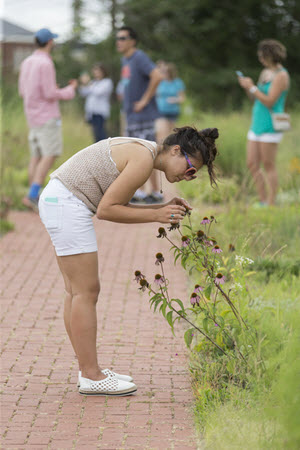 Constructed in several layers to aid with the filtration process, the green roof converted one acre of typically impervious reservoir roofing. Every layer of rock, soil, and plant was chosen to optimize the filtration and loading constraints of the existing roof. This includes selecting plants from around the country not commonly found in the middle of an urban D.C. neighborhood.

Drought-resistant flora, including prickly pear cactus, were planted due to their high tolerance to the warmer temperatures on the roof compared to traditional ground soil.

“I liked that they were trying to implement something as a pilot project to show that green roofs can be a very effective way to mitigate storm runoff,” said tour leader Kelly Doyle, P.E., M.ASCE, of the Nevada Section’s Truckee Meadows Branch. “It was interesting how they had to be mindful of the existing structure and couldn’t make the roof too heavy. To do this, they had to weigh every plant and think carefully about the layers they placed on the roof.”

“There are opportunities for sustainable projects all around us,” said Elizabeth Ruedas, EIT, A.M.ASCE, of California’s Orange County Branch. “It may take a bit of additional effort, time, and coordination, but the results are well worth the investment.”