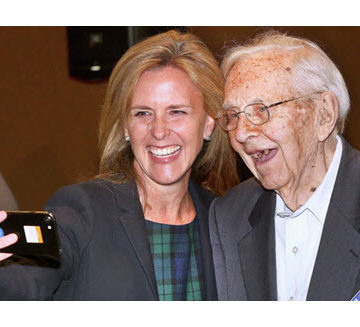 Robert B. Rhode, ASCE’s oldest active member, has died at the age of 104 in his hometown of Duluth, MN.

Rhode, P.E., L.S., F.ASCE, leaves a legacy of civil engineering accomplishments both in Duluth and with ASCE. He served as the Duluth Section president in 1953-54 and on ASCE’s Board of Direction as the District 7 director in 1980-82. Age didn’t keep him from remaining active with ASCE, as he continued attending Section meetings in recent years, well beyond his 100th birthday.

“He would come to literally every monthly Section meeting,” said Chris Rousseau, P.E., M.ASCE, himself a former Duluth Section president and Region 3 governor.
“Every time we had a technical presentation, he always had at least one question for the presenter. He always had something to say.

“He wanted to be there, always supportive, always interested in what we were doing. Just a very affable, very welcoming guy. And he loved the organization, that was very clear.”

Born on Christmas Eve 1913, Rhode joined ASCE in 1937 after receiving his degree in civil engineering that year from the University of Minnesota. He worked for the Omaha Railroad and the Northern Pacific Railroad before beginning a 40-year career with the Duluth, Missabe, and Iron Range Railroad in 1948.

“His family recalls his dedication during his tenure with the DM&IR,” Rousseau wrote of Rhode in a member profile for the Duluth Section. “He selflessly, on many occasions, responded to late night calls to address emergency situations including derailments. Many of his engineering accomplishments still remain in service, including railroad bridges and the DM&IR loading docks with which he had design involvement.”

Rhode earned ASCE Life Member status in 1978 before current Society Younger Members were even born. He had been named an ASCE Fellow in 1966.
He also was a life member of the American Railway Engineering and Maintenance-of-Way Association, and was involved in local and state associations for developmentally challenged children.

Robert married Elizabeth Tennant Rhode in 1940, and they raised four children together before her passing in 1979. He is survived by those children, Peter (Mary) of Roseville, MN, Richard (Martha) of St. Paul, MN, Christopher of Duluth, MN, and Katherine (Peter) Cassioppi of Rockford, IL, six grandchildren, and 11 great-grandchildren.

“As a Section, I think we were incredibly blessed to have him,” Rousseau said.