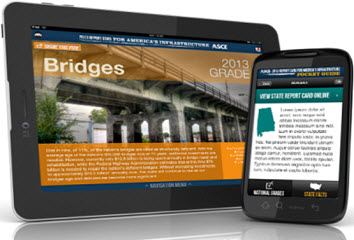 The new 2013 Report Card for America’s Infrastructure is available to download for smartphones and tablets at iTunes, Google Play, and www.infrastructurereportcard.org.

In a much anticipated release, ASCE’s 2013 Report Card for America’s Infrastructure gave the nation’s infrastructure an overall grade of D+, showing slight progress from the D in the last Report Card issued in 2009. It’s the first time since ASCE started producing Report Cards in 1998 that the grades rose overall and in several sectors.

Released Tuesday, March 19, in Washington, D.C., the report provides our nation’s political leaders, policymakers, business leaders, infrastructure stakeholders, the media, and the general public with expert advice from the civil engineering community about the condition of infrastructure across the nation.

“As civil engineers, ASCE believes that we are the stewards of infrastructure—we designed it, we built it, and we actually oversee the operations and maintenance of it in many cases,” notes ASCE President Gregory E. DiLoreto, P.E., F.ASCE. “So as stewards, we have a responsibility with the Report Card to call attention to the state of the nation’s infrastructure. We as Americans need to be proactive in monitoring and taking care of our infrastructure so that it will be here not only for us, but for our children and our grandchildren.”

ASCE has produced four previous Report Cards in 1998, 2001, 2005, and 2009—as well as the Progress Report for America’s Infrastructure, which was released in 2003. These assessments have highlighted the fact that America’s critical infrastructure—principally its roads, bridges, drinking water systems, mass transit systems, schools, and systems for delivering energy—may soon fail to meet society’s needs.

“Since 1998, ASCE felt an obligation to make a report on the state of infrastructure in the U.S. to show that we are not making the necessary investments to improve it and not even making some of the investments that we need to maintain what we have,” explained ASCE’s immediate past president, Andrew W. Herrmann, P.E., SECB, F.ASCE, chair of the Advisory Council of ASCE’s 2009 Report Card for America’s Infrastructure, and member of the present Advisory Council that produced the 2013 Report Card. “We as civil engineering professionals feel that it is our obligation to point out to the White House, Congress, and state and local legislators what is happening to the infrastructure in the U.S.”

“The reason why we want to make improvements to our infrastructure is not just simply to improve the grade,” added DiLoreto. “Investment in our infrastructure will help grow our economy; it will create jobs and improve our quality of life. It means being able to get to work easier without sitting in traffic all day long; and continuing to enjoy safe, clean and reliable drinking water anywhere in the country; and having an electrical transmission grid with fewer or no blackouts.”

“The methodology with which this Report Card was produced was a very objective piece of work, not a bunch of people using a gut feeling, but real numbers,” stated Robert Victor, P.E., M.ASCE, ASCE Region 2 director and chair of the advisory council for ASCE’s 2013 Report Card for America’s Infrastructure. “We put together a committee of about 30-plus civil engineers, and they are all technical experts in various civil engineering fields.”

According to Herrmann, the Report Card concludes that to raise the grades and get our infrastructure at an acceptable level, a total investment of $3.6 trillion is needed by 2020 across the entire 16 sectors. Currently, only about $2 trillion in infrastructure spending is projected, leaving an estimated shortfall of approximately $1.6 trillion.

“This is a chance for us to make it known what is happening with the infrastructure and not only point out some of the deficiencies but where we are doing things right,” says Herrmann. “For example, the bridge category went up by a half a grade [to a C+] and that is good and reflects that our cities and states have taken a concentrated view towards some of the structurally deficient bridges and started to repair them. But it is not all good when you look at some urban areas where you still have a lot of deficient bridges. So, by getting the message out with this report, we can start reducing the overall number of deficient bridges.”

“The message that we want to get out is that the Report Card is a tool that ASCE produces every four years to track the baseline of various sectors of our infrastructure,” concluded Victor. “I think that information is worth sharing and it is very good for opening people’s eyes—everyone from the general public to our legislators, the people who make our policy.”

ASCE’s 2013 Report Card for America’s Infrastructure is now available online. It is also available as a free app for smartphones and tablets for downloading via the iTunes App and Google Play stores – search “American Society of Civil Engineers.”