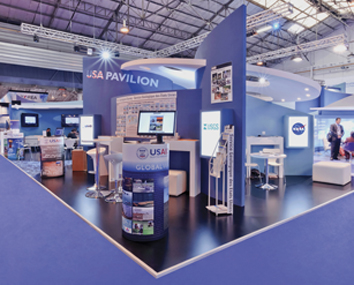 With the naming of C. Dale Jacobson, and Daene C. McKinney to the World Water Council’s Regional and Thematic Commissions, ASCE/EWRI will play a significant role in the development of the next World Water Forum, April 2015 in South Korea. Above, ASCE/EWRI organized a USA pavilion at the sixth World Water Forum in France, March 12-20, 2012, attended by more than 35,000 people. Courtesy of LE Design and Scenography

C. Dale Jacobson, P.E., BCEE, D.WRE, F.ASCE, a governor on the World Water Council Board, and Daene C. McKinney, Ph.D., P.E., M.ASCE, an alternate governor on the same board, were appointed to serve, respectively, on the Regional and Thematic Commissions. The Thematic Commission comprises 8 members: 4 from the Board of Governors and 4 from the host country, South Korea. The Regional Commission is made up of 4 members, 1 each representing Africa, Asia, Europe, and the Americas.

“Our hope is to position ASCE/EWRI to be a guiding organization for the main overarching themes of the Seventh World Water Forum, which would then set the stage for us to be actively involved in the development of sessions that flow from the themes,” explained McKinney, who is also chair of ASCE’s World Water Council Activities Committee and professor and associate chair in the Department of Civil, Architectural, and Environmental Engineering at the University of Texas at Austin.

“I am heavily involved in trying to hammer out what those themes will be and which organizations will take responsibility for these themes,” McKinney said. “[They] fall into a number of broad categories, such as water for security, water for sustainability, and water for ecosystems, as well as more cross-cutting areas that we call ‘constructing implementation mechanism systems,’ which cover things like financing, technology, education capacity building, [and] community stakeholder involvement.”

Established in 1996, the World Water Council, of which ASCE/EWRI is a member, plays a major role on the global stage in promoting awareness and building political commitment to facilitate efficient management of water on an environmentally sustainable basis. At the 6th World Water Forum, in Marseille, France, ASCE/EWRI organized a USA Pavilion and participated in 11 important panel sessions.

According to the World Water Council, the Forum in Marseille was attended by over 35,000 people from 173 countries, including 15 heads of state or government; 103 ministers, vice-ministers, or secretaries of state; 170 members of national delegations and international organizations; and more than 750 elected officials, of which approximately 250 were mayors and 250 were parliamentarians.

“ASCE/EWRI has been involved in each of the World Water Forums since the second one in The Hague, Netherlands, in 2000,” says Jacobson, vice-chair of ASCE’s World Water Council Activities Committee, past president of EWRI, and a senior engineer with the Omaha, Nebraska, office of Short Elliott Hendrickson Inc. “We had a significant presence at the Sixth World Water Forum and at the Americas panel sessions, which ASCE/EWRI organized and participated in, dealing with solutions focused on the use of treated wastewater for agriculture production.

“At the next World Water Forum, in Korea, we are looking to develop themes in the areas of water and sanitation, adaptation to climate change, water and food, water and energy, and ecosystems to take us through the next step in the implementation process.”

Both Jacobson and McKinney hope to attract other ASCE/EWRI members to get involved in the World Water Forum by lending their professional expertise. There will be a session on the World Water Forum at the ASCE/EWRI 7th International Perspective on Water Resources and the Environment Conference, in Quito, Ecuador, January 8-10, 2014, and at the EWRI World Environmental & Water Resources Congress 2014, in Portland, Oregon, June 1-5, 2014.