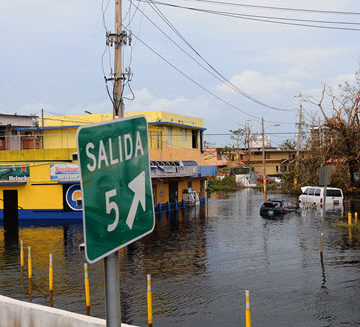 Jennifer M. Aponte Rivera, A.M.ASCE, grew up in Puerto Rico and graduated from the University of Puerto Rico, Mayaguez in 2016. She now lives in northern Virginia and works as a civil engineer for the Federal Highway Administration’s Eastern Federal Lands Highway Division Road Inventory Program.

In the wake of Hurricane Maria’s devastating landfall on Puerto Rico, she offered the following report about her home and what her family is dealing with.

Many roads that connect to the rural areas collapsed due to excessive rain lead to flooding. 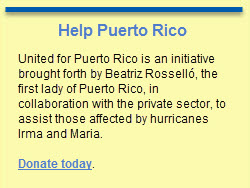 The most critical cases could be in the rural/mountain areas of towns like Aibonito, Barranquitas, Utuado, and Jayuya. Due to bridges or road collapses, in areas or towns like Morovis, the only way out of the residential neighborhood is to swim across the river or drive at least three hours around a mountain – a near-impossibility because of the scarcity of gas.

Hurricane Maria has damaged Puerto Rico’s power infrastructure in ways that, in a worst-case scenario, could take months to repair. Puerto Rico’s Governor, Ricardo Roselló, said that the island’s energy infrastructure is “a little bit old, mishandled and weak,” and towers carrying high-voltage lines may have been toppled by the storm.

In the town of Quebradillas, the Guajataca Dam had damage due to the heavy rains. An alert by the National Weather Service was issued on Sept. 23. Around 70,000 people were under evacuation orders; their homes were in the surrounding areas or downstream from the dam and could receive an impact if the dam failed.

My family lives in the suburbs of the city of Guaynabo, Puerto Rico. It’s a city near San Juan. I spoke with my family members the morning of Sept. 20. I was lucky to reach my mom the same afternoon because she’s a nurse and she was working in a refuge in the Convention Center of San Juan.

I got news from my dad the day after by text message – the communication was down. I was still unable to reach friends that live in other parts of the island, especially in the town of Ponce (at the south). After a week, I finally got news from friends from Ponce and Bayamon (a city that is less than 15 miles from my house). 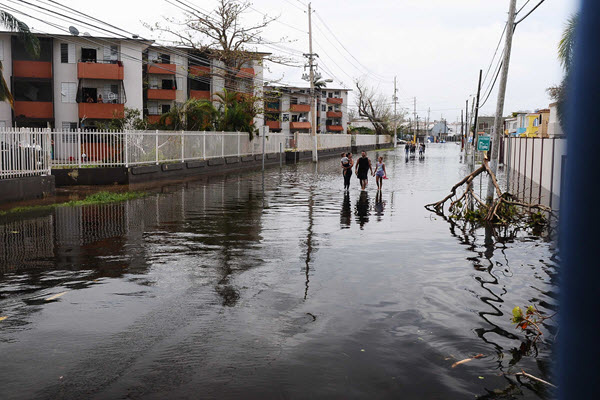 People had to drive from their houses and risk their lives just to be able to make a call and say they were safe. What normally was a two-hour ride now could take easily up to five hours (from San Juan to Mayaguez, a city on the west coast).

After a week, my parents decided to get gas at a station. What typically could take 10 minutes, it now takes almost an entire day. The lines for getting gas are long, and the amount of money to spend on gas is limited. In some of them it is $10 per person or car. The same happens with food – the resources are limited.

In my house, they have water, but due to the lack of electric power, I didn’t recommend them to drink that water. The water plants work with electricity, so there is no certainty that their water passed the quality tests. My brother works at a grocery store, and my mom mentioned me to that he started working again and people are getting limited time to be inside the store to get what they can while they are inside.

I didn’t pass this hurricane on the island. But I have faded memories of Hurricane Georges back in 1998, and the damage that hurricane did can’t compare to this one.

This event will definitively impact many lives from different perspectives. As a civil engineer, it made me think about how resilient we need to be with the upcoming challenges of climate change, and the need to adapt our existing codes.

Also, we need to assess and determine how to enhance the “life” of the current structures that we have. We design for an event in 500 years, but this was definitively an event that we didn’t think we would have back in 1929 (when the Guajataca Dam was built).