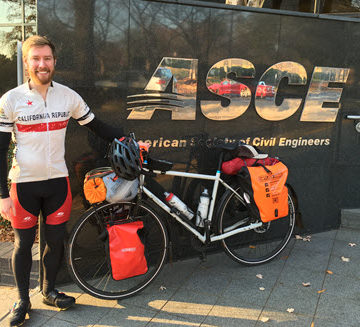 Gilbert’s engineering background combined with his outgoing personality make him the perfect messenger for communicating with elected officials about infrastructure.

It was your standard get-to-know-you activity.

Go around the circle, give your name, where you live, your job, and one interesting fact about yourself.

And it got your standard responses, the civil engineers in the room each dutifully participating with the expected answers.

“So my name is Jazz. I just quit my job, I don’t really know where I’m going to live, and I’m about to leave on a two-month bike ride across America.”

Gilbert, P.E., M.ASCE, as his get-to-know-you answers indicate, is quite the character. He’s enthusiastic, funny, and outgoing in the extreme. These qualities have made him one of ASCE’s most visible Younger Members, a successful structural engineer in California, and a popular practitioner adviser for his alma mater Cal Poly SLO Student Chapter.

But he wasn’t kidding with those answers. He really did leave his job of five years, and he really did ride his bike from coast to coast.

It may sound crazy, but there’s definitely a method to the madness. 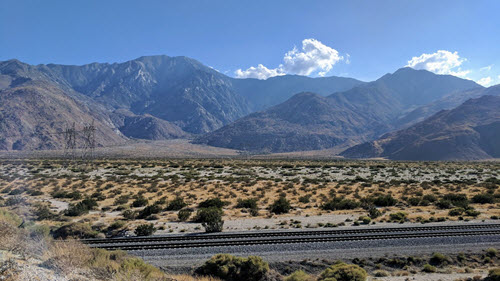 Gilbert has long been a voice of infrastructure advocacy for ASCE, participating in Infrastructure Week events, joining his fellow Region 9 members for Legislative Drive-In days in Sacramento, and meeting with Members of Congress in Washington, DC, at the ASCE Fly-In.

“It’s interesting to me,” Gilbert said. “Being involved through ASCE, I think being part of policy change. I like helping to influence people.”

Gilbert’s engineering background combined with his outsized personality make him the perfect messenger for communicating with elected officials about infrastructure.

“All of my friends make fun of me because every single party, every social gathering, every professional event, I’m the one going around, talking, making sure everyone is doing well, seeing how everyone’s doing,” Gilbert said. “That’s just what I enjoy doing. I like conversing with people, I like interacting, I like hearing people’s stories.”

So when Gilbert made the decision to remake his career last fall, he combined his love for meeting people with his passion for cycling and headed out on the road for a two-month bike tour across America.

The plan? See the country and talk to people about two important issues: suicide prevention and the importance of infrastructure investment.

“Me being me, I didn’t want to do just one thing,” Gilbert laughed. “I like to overwhelm myself and try to do too many things.” 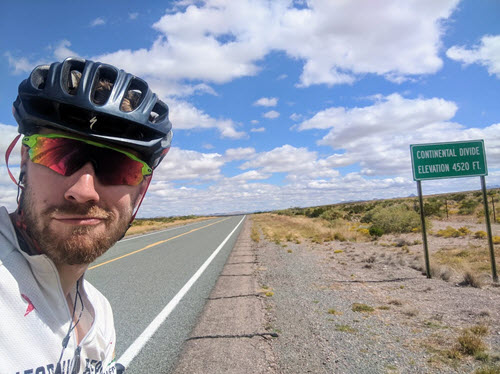 “There were countless times where a car was within three inches of me, and if there was a gust of wind or I had turned slightly to avoid a rock, I would’ve smacked straight into a car,” Gilbert said. PHOTO: Jazz Gilbert

Gilbert may occasionally be guilty of overambition, but he’s also stubborn.

So he stuck with the plan and finished the trip – from Pomona, CA, to Phoenix and Tucson, to El Paso to Dallas to Tuscaloosa, to Atlanta to Charlotte to Richmond, to DC, and finally Baltimore. Eight to 12 hours a day; 2,800 miles.

Gilbert continued the trip even when the rack on the front of his bike broke and locked up his front wheel, sending him flying over his handlebars somewhere in the middle of Texas.

He continued the trip even after a motorist rear-ended him while he was waiting at a stoplight near Starkville, MS.

“I heard her brakes slam, and then I was on her hood and my bike was on the ground,” Gilbert said. “She gets out of her car and she’s like, ‘I am so sorry! I didn’t mean to hit you.’ And I’m like, ‘Yeah, no [kidding], you didn’t mean to hit me. If you did mean to hit me, this would be a real problem!’ But I was totally fine.”

All part of the adventure.

Gilbert certainly got an up-close-and-personal view of the nation’s infrastructure, especially at it relates to cyclists.

“There were countless times where a car was within three inches of me, and if there was a gust of wind or I had turned slightly to avoid a rock, I would’ve smacked straight into a car,” Gilbert said.

“It’s crazy the number of people that just squeeze by you. It’s scary. Generally speaking, the difference in roadway bike infrastructure varies depending on whereabouts in the country you are.”

The best places? The rail-to-trail projects he found in Texas and throughout the Southeast.

“There are these former rail lines that they’ve turned into trails of varying degrees,” Gilbert said. “Some of those remain as dirt trails or off-roading trails for mountain bikes. And through cities, some of them will be paved as multi-use trails. And some are straight up like 100 miles of paved trail that go through the middle of nowhere. Those were the prettiest and most enjoyable parts of the trip.” 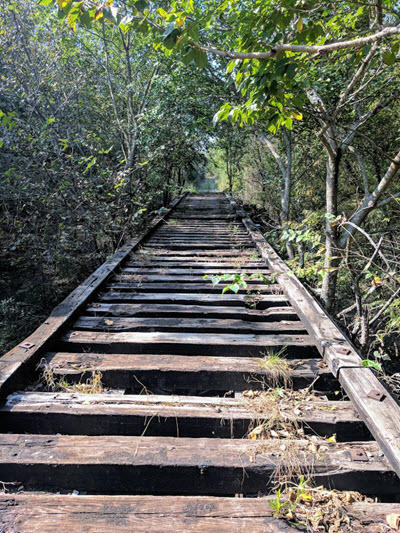 As Gilbert returns to so-called normal life, the question arises: what’s next?

He may have left his civil engineering job, but he isn’t necessarily leaving civil engineering. Gilbert is looking into a path to politics via law school. Instead of advocating for infrastructure as a practitioner, he could push for policy changes from inside the system.

“We absolutely need more engineers in politics,” Gilbert said. “We approach things in a different sense. We think through things very holistically. We weigh pros and cons and generally make fairly unbiased, objective decisions. So that mindset is something that I feel would really be valued and valuable.”

Perhaps we will see Senator Jazz Gilbert in the future.