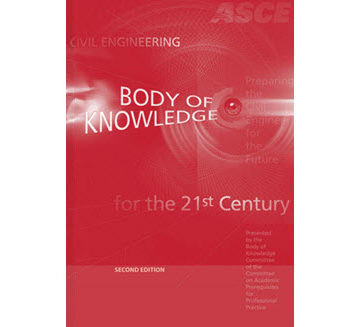 Career development, it is said, often isn’t about what you know but who you know.

But in civil engineering, what you know matters.

That’s why ASCE published the Civil Engineering Body of Knowledge for the 21st Century in 2004, outlining the knowledge, skills, and attitudes essential for entering into the practice of civil engineering at the professional level. A second edition – known as BOK2 – followed in 2008, and a task committee is hard at work on an update: BOK3.

“We’re living in times that are changing at an accelerated rate,” said committee chair Ken Fridley, Ph.D., F.ASCE, a senior associate dean at the University of Alabama. “As members of the [civil engineering] profession, if we’re not looking forward toward the horizon, we could end up with significant problems in the future. For the sake of our profession and the sake of those who will be entering the profession in the future, we have to put some definition on what’s needed in the future.”

In many ways, the Body of Knowledge is an aspirational document, reflecting the knowledge, skills, and attitudes a professional civil engineer should acquire. That doesn’t mean the BOK merely represents wishful thinking – quite the opposite. The BOK is key to both ASCE’s Raise the Bar initiative and to influencing what ASCE drafts as civil engineering program criteria for ABET.

Fridley and the Civil Engineering Body of Knowledge 3 Task Committee first met last October to determine if an update was necessary. The group came to a consensus that, yes, eight years later, it was time for a third edition.

“There are things that have happened since the BOK2 was published that we really need to look at in detail and consider,” Fridley said. “We also are going through the process of critically evaluating and assessing the BOK2 against the needs that are out there.”

That process involves the review of hundreds of documents, published papers, and pieces of literature – with a huge role for ASCE members to play.

Those interested in contributing to the Body of Knowledge 3 have a couple of options. They can offer their expertise and perspectives through an online survey, or email to express an interest in serving as a corresponding member of the committee.

“They’re invited to give us constructive input as we’re going forward,” Fridley said. “Many corresponding members join us on our weekly conference calls. They’re a very important part of the process.

“We have a very open process. We’re seeking as much input from members as possible.”