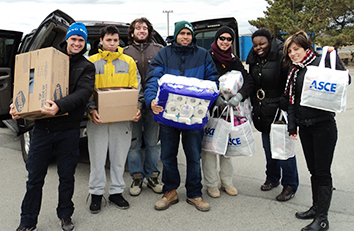 A total of 25 students from the ASCE student chapter at the New York City College of Technology, which is located in Brooklyn and is part of the City University of New York, helped make the holiday season a little brighter for the residents of Breezy Point, a community in the borough of Queens that was badly damaged by Hurricane Sandy. Together with members of the American Concrete Institute chapter at the college, the students organized an emergency relief drive in the days leading up to Thanksgiving. They set up a table in the lobby of the Voorhees Building and over a 10-day period raised more than $250 and collected hundreds of badly needed items.

In addition to collecting and delivering the items to the Silver Gull Beach Club, the drop-off location for donations to Breezy Point, the students helped area residents clean up their homes and did some light demolition work. The Society contributed to the student’s cause by providing 45 ASCE tote bags for holding and transporting the donations.

“The bags were here within the week, so it seems like anytime we ask ASCE for something they are immediately there to help,” says Gerarda M. Shields, Ph.D., P.E., M.ASCE, an associate professor at the New York City College of Technology and the student chapter’s faculty adviser. “The students were superexcited to get the bags to distribute the materials; it all worked out very well.”

According to the New York City Fire Department, 111 of the 2,800 homes in Breezy Point were destroyed and 20 others were severely damaged as a result of the flooding and 70 mph winds brought by Hurricane Sandy.

“The idea [of a Thanksgiving relief drive] came about when we [in the student chapter] were sitting around talking about how we could help people who were affected by Hurricane Sandy,” recalls Marcelo Moreira, S.M.ASCE, the president of the ASCE chapter. “Our original idea was to just go down [to the Long Island shore] and help as many people as possible, but we realized that was not the best way to get involved.

“So we decided to start this relief drive from Monday, November 12, through Wednesday, November 21. We had a table set up in the entrance to the Voorhees Building, and we were accepting any donations—from pocket change to clothes to batteries to flashlights—anything that could help out the residents of Breezy Point.”

“During the ten days we collected about two hundred and fifty dollars,” adds Florina Pupla, S.M.ASCE, the chapter’s vice president. “On Saturday, November 24, we went to the supermarket and spent all that money on flashlights, toiletries, cleaning products, et cetera, and we dropped all that stuff off at the Silver Gull Beach Club.”

But the donations didn’t stop there, as the students found store owners, neighbors, and residents who were willing to contribute to their drive.

“I was shopping at a grocery store one day [the Grocery Discount, at 819 Seneca Avenue, in Queens] and was talking to the lady who owned the store,” says Pupla. “I explained what [the students] were doing, and she said that she wanted to help victims of Hurricane Sandy but did not know how. She ended up donating [from her store] diapers, soup, canned goods, trash bags, cleaning supplies, sponges, and paper towels. I was so happy because I knew this was really important stuff that people in Breezy Point could use.”

“The [relief drive] was completely student driven,” notes Shields, who has family and friends living in the Breezy Point area. “At first, I was leery about the students going down to that area because I had personally been there the day after the storm and saw firsthand how bad the damage and devastation were.

“So I said [to the students], ‘Let’s talk about this, let’s figure out the best way for you to offer help to this community.’ And I want to give the students credit; they sat down and planned the whole thing out.”

To collect money and relief items during their Thanksgiving drive, students from the ASCE chapter at the New York City College of Technology set up a table in the lobby of the Voorhees Building from November 12 through November 21. They formed teams of three so that the table would be manned throughout the day. Taking their turn are, from left, Aleksandr Cheplyakov, S.M.ASCE, Sandy Ponticel, S.M.ASCE, and Carlos Santana, S.M.ASCE. Gerarda M. Shields

All of the students involved in the effort live in the New York City area and were personally affected by Hurricane Sandy by seeing and, in some cases, experiencing the damage firsthand. After setting up the table in the lobby of the Voorhees Building they formed teams of three so that there would be consistent coverage every day from 10 AM to 6 PM.

“I live near Coney Island and saw quite a bit of damage from the hurricane,” says Aleksandr Cheplyakov, S.M.ASCE, the student chapter’s marketing coordinator, who took his turn at the table collecting money and relief items. “It really opened my eyes to what Mother Nature can actually do, so I just really wanted to help not only as a civil engineer but just as a regular human being.”

“The tough part about it,” says Francisco Contreras, a member of the student chapter and the captain of the team that will compete in the National Student Steel Bridge Competition in 2013, “is that you can’t just get in your car and go to these communities where the hurricane hit and help people because a lot of these hard-hit places have police checkpoints and they just don’t allow anybody in the area for security reasons.

“So it was pretty cool the way we first managed to raise money and get all these materials together and then, second, crammed all the material, including ourselves, into cars and took the stuff over to the Silver Gull Beach Club, which was collecting and distributing it to the area residents.”

And with the help of Shields’s mother, who lives in the Breezy Point area, the students made contact with families who needed help cleaning up their homes after the flooding caused by the hurricane.

“I felt very happy doing it,” says Pupla. “All of the students were glad to have helped clean people’s homes, and at the end of the day when we left, [the homeowners] could not thank any of us enough.”

“I am just extremely happy and proud that our students did this,” says Anthony Cioffi, P.E., M.ASCE, who in addition to being a professor at the New York City College of Technology and the chairman of its construction management and civil engineering technology department is a governor of ASCE’s Region 1. “For me as an educator and chairman of the department, I could not be more pleased that they volunteered and on their own collected much needed material for the residents of Breezy Point.

“This is something that ASCE strives for—that we go beyond being engineers and get involved in the community doing humanitarian work. This is a perfect example of what we do as a profession—helping people, especially in a crisis situation. For the students, I think this is just another part of their education and their learning.”

“The [Thanksgiving relief drive] meant so much to me personally because these people [in Breezy Point] were my neighbors whom I go and visit,” adds Shields. “The students cared enough about helping people that they went out there and did something.”

Shields points out that the endeavor may not have ended at Thanksgiving, as the students are now discussing going back to Breezy Point in the spring and helping residents with some of the light reconstruction work.

“There will be a lot of rebuilding [in Breezy Point] this spring,” says Shields. “And I am going to continue to ask around to find out what people could use help with.”

“The [Thanksgiving relief drive] was a great experience for all of us,” concludes Moreira. “It was almost breathtaking seeing the destruction that a hurricane can cause, and knowing that our student chapter was able to go and help—even a little bit and in our own way—was very gratifying.”

Here is more information about the ASCE student chapter at the New York City College of Technology.