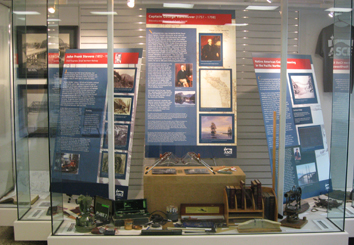 To celebrate its 100th anniversary, ASCE’s Seattle Section commissioned a series of 10 professionally designed panels prominently displayed throughout Northwest Washington state. From June 2 through June 21, the panels were displayed in the Snohomish County Administration Building in Everett, Wash. Sunny Rose

Charles Hinckley Baker had a vision.

An unemployed engineer, Baker believed that he could bring affordable electricity to Seattle by harnessing Snoqualmie Falls to generate hydroelectric power. Although used in every household today, electricity transmitted over long distances as alternating current (AC) was unproven in 1893. Baker was able to convince his father, a successful Chicago businessman, to finance what would become known as the Snoqualmie Falls power plant and ultimately founded the Snoqualmie Falls Power Company, which would successfully introduce AC hydroelectric power to Seattle.

The story of Baker (1864-1924) and his development of the world’s first underground powerhouse to harness electric power is covered in one of 10 professionally designed panels highlighting the history and accomplishments of civil engineering in Seattle. Entitled Civil Engineers that Built Seattle – Centenary Exhibit, it is one of ASCE Seattle Section’s cornerstone projects commemorating its 100th anniversary.

Since January, the Section has had its exhibit displayed prominently at the Sea-Tac (Seattle-Tacoma) International Airport, the National Student Steel Bridge Competition at the University of Washington, the Snohomish County Administration Building, the Pioneer Association of the State of Washington, and Bellevue (Wash.) City Hall. Later this year, it will be seen at ASCE’s Ports ’13 COPRI Conference in Seattle, in the Museum of History and Industry and MOHAI’s separate Community Gallery, and at the Section’s Marquee Centennial Gala on Oct. 5.

With the exhibit, the Section’s History and Heritage and Centennial committees sought to showcase the Section’s heritage and at the same time, raise the general public’s awareness of civil engineers’ essential contributions to society. The panels highlight civil engineers who built projects and created organizations that have contributed to the growth of northwest Washington state.

“Those of us on the Seattle Centennial Committee felt it was really important to honor the folks who came before us, and put forth an effort worthy of the 100 years,” said Sunny Rose, P.E., M.ASCE, Centennial Committee co-chair with Ronald Bard, P.E., M.ASCE. “One hundred years is pretty monumental, and we felt that if we were going to do something, it had to be done right.”

The panel exhibit is just one of several Section activities under the centennial theme, People, Projects, and Policies. In January, the celebration began at its monthly meeting with a special event honoring life members. Attendees heard a presentation from Knute Berger, author of Space Needle: The Spirit of Seattle.

In May, the Section issued its first state Report Card since 2003. The release attracted strong local media interest. Members evaluated and graded nine infrastructure categories, ranging from a low of D+ for both roads and transit to a high of B for dams, to arrive at an overall C grade. “We cannot hope to have an A+ economy with a C-level infrastructure,” said Section president James Chae, P.E., M.ASCE.

May also saw the release of “100 Years of Civil Engineering within the Seattle Section of the American Society of Civil Engineers,” a paper published by the Section’s History and Heritage committee.

Later this year, the Section will launch the Seattle Parks Trail Project, which will take members of the community through a hike along the Duwamish Greenbelt Trails, which form a significant link to the city’s largest wildlife habitat corridor.

“We started planning our centennial in 2011. We wanted to create a pretty comprehensive project; we tried to spread it out throughout the year and do many different types of things,” explained Rose, lead engineer and project manager in Parsons Brinckerhoff’s Seattle office. “But the Marquee Centennial Gala we have planned for Oct. 5 will be the pinnacle of it all.”

Current plans for the gala event call for ASCE President Gregory E. DiLoreto, P.E., P.L.S., D.WRE, F.ASCE, to present the keynote speech at the new Museum of History and Industry in Lake Union Park. The museum will be open for guests to explore, and the panel exhibit will be on display. Joining the festivities will be Daniel J. Evans, a civil engineering graduate of the University of Washington who was the state’s governor from 1965 to 1977 and a U.S. senator from 1983 to 1989.

One highlight of the evening will be the reading of a special centennial poem by Kathleen Flenniken, the state poet laureate – who once was a civil engineer.

“She actually worked for many years at the Hanford Nuclear Reservation site in eastern Washington,” Rose said, “which is the nuclear waste plant, and ended up writing a collection of poems on the nuclear site and published them in her book, Plume.”

“Overall, the Centennial Committee is pleased and happy with the effort that we have put forward and certainly glad that we took on this challenge,” stressed Rose. “With the resources that we had, I don’t think we could have done more or done it any better.”

When asked what advice he would give to other Sections and Branches who will be celebrating their 100th anniversaries over the next few years, Rose says, “Plan early, be realistic, and budget accurately. And at least have a couple of dedicated volunteers that are willing to dig in and get things done; that is the way that we did it.”

Next month, learn how ASCE’s Los Angeles Section is celebrating its centennial.