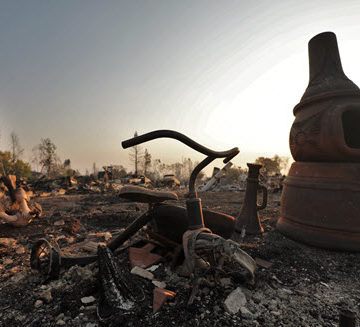 Kennedy, his wife, and their 5-year-old had no choice but to evacuate their Santa Rosa home Tuesday evening, on orders from the city, as the fires that have destroyed thousands of homes across the region drew closer to his neighborhood.

“We loaded up what we could, grabbed the valuables and essentials,” Kennedy said.

The fires began Oct. 8 and blew rapidly across Napa and Sonoma counties. They have now been blamed for more than two dozen deaths and thousands of displaced residents. And this is an area that was already dealing with a housing crisis before this devastation.

“This is all new. I think it’s caught everyone by surprise,” Kennedy said. “It went from rural to urban really fast. The winds really are the driving force behind that. There was no time to battle the blaze. It was all about getting people out to safety.”

For now, Kennedy’s family is staying nearby with his parents. He returned to his home Wednesday by bike to check on things. His house was without power as the fires pushed into adjacent Annadel State Park.

Kennedy has a civil engineer’s practicality when it comes to his property.

“I’m not particularly afraid if our house burns down and I lose everything,” Kennedy said. “I don’t want that to happen, but if it happens it’s not going to be the end of the world. I just worry about the people who have been directly affected so far.”

Kennedy said people are helping people – making sure the displaced have places to stay.

“I’ve seen a lot of support around the community,” Kennedy said. “There’s a lot of open shelters – schools, churches. Everyone is coming together and helping out.”

Oct. 19 UPDATE: Kennedy and his family returned to their home Oct. 15. The fires crept close to his neighborhood, but no homes suffered damage.

“We’re lucky,” Kennedy said. “There were a lot of people who weren’t as lucky as us. It’s going to take a long time, I think, to get back to normal. But the City and the County are taking a lot of steps to expedite building permits and things to get temporary housing set up.”