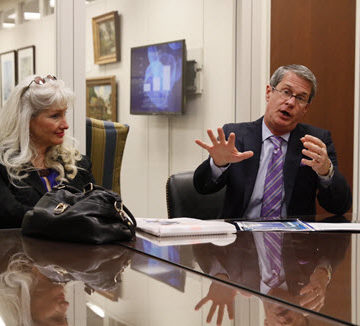 ASCE President Elect Norma Jean Mattei and a group of members from Louisiana meet with Sen. David Vitter (R-LA) during the Legislative Fly-In. Photo by David Hathcox for ASCE.

The irony was not lost on the room.

More than 200 ASCE members from across the country – 49 states represented – gathered in Washington, DC, this week for the annual ASCE Legislative Fly-In to advocate on Capitol Hill for infrastructure improvements, only to learn that the Washington Metro was closing for 24 hours to make emergency inspections the exact day of the scheduled Congressional visits.

No matter. It was just another very timely talking point for the members to make the case for infrastructure.

“Overall it was a great experience,” said Shelia Montgomery-Mills, P.E., M.ASCE, attending her fifth Fly-In, this year with a group of fellow engineers from Alabama. “I got some fired up fellows that are committed to taking this back to Alabama and trying to fire up a few other people. They are very enthusiastic about coming back next year.”

The focal points for the members to push on the Hill this year included the Federal Aviation Administration bill reauthorization, work on and passage of a Water Resources Development Act so that it is on a two-year cycle, and the importance of increased investment for water infrastructure.

Members from the Georgia Section prepare for their meetings on Capitol Hill. Photo by David Hathcox for ASCE.

Senate Minority Leader Harry Reid (D-NV) was among the many members of Congress and their staffs who met with expert civil engineers.

ASCE Nevada has long been active in the Legislative Fly-In, making it a point to send new Younger Members each year to learn the power of advocacy.

“I thought it’d be a good opportunity to see how the policy side works and how ASCE influences that,” Jaffer Almosawy, EIT, EI, A.M.ASCE, a civil engineer with GCW Inc. in Las Vegas. “It has a very large impact on work I’m doing and what I’m doing in the field.”

Almosawy admitted he was a little nervous about the government meetings. But he had veteran Younger Members – Kelly Doyle and Maylinn Rosales – from his Section there with him to help.

“Our elected officials simply don’t know the things that we know about these issues,” said Maylinn Rosales, P.E., M.ASCE, a project engineer for Black & Veatch in Las Vegas. “So they really appreciate the personal notes we can give them in the areas we work in. They’re excited that we’re there.”