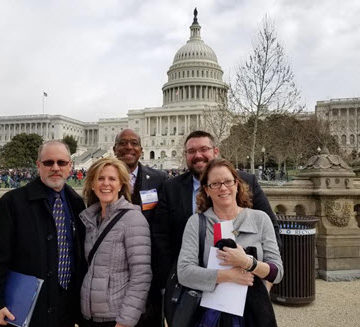 Florida sent a large group of ASCE members to advocate for infrastructure during the 2018 Legislative Fly-In.

No problem for Logan Johnson.

The New Hampshire Section President-Elect wasn’t going to let a little thing like a blizzard keep her from the ASCE Legislative Fly-In in Washington, DC, this week. With no flights leaving New England, she made her Fly-In trip a “drive-in.”

She acknowledges maybe even sleeping in the hatchback trunk of her rental car at one point, but she made it safely to DC.

Such is the commitment of ASCE’s members to the infrastructure advocacy cause.

Johnson joined 210 other ASCE members from 49 states, District of Columbia, and Puerto Rico for the Society’s flagship annual advocacy event, delivering the message to Congress that infrastructure investment matters.

“It’s important that they hear from us,” Johnson said. “… We’ve got to make our voice heard. And what better way to do that than to show them that you’re committed by coming down here in person?”

The heart of the two-day event is the trip to Capitol Hill for member visits with their elected officials to discuss infrastructure solutions. This year’s focus topics included the urging Congress to draft a comprehensive infrastructure bill, FAA reauthorization, the 2018 WRDA reauthorization bill, and the SRF WIN Act.

Fly-In veteran Darren Olson, P.E., D.WRE, M.ASCE, noted a sense of positive energy around both the ASCE group and the conversations with members of Congress.

“This is one of those unique issues that’s a bipartisan issue,” said Olson, who chaired Illinois’ recent state infrastructure report card. “A lot of the people that I talked to… everyone gets it. It’s just a matter of getting our elected officials to that point of wanting to come together and make this happen.”

ASCE members can continue to support the Fly-In’s advocacy efforts by sending an email to Congress in support of infrastructure investment.

Always great to meet with @repdinatitus to talk about #infrastructure #investment! Thank you for taking the time and for your #leadership! #asce2dc @ASCEGovRel pic.twitter.com/wSQ7zuLkst

Thank you Representative Massie for having us in your office today to talk about Kentucky’s Infrastructure needs. #ThomasMassieKY #ASCE2DC. pic.twitter.com/djvq7KZPNR

Great meeting with @Scotttaylorva and his staff today to discuss our nation’s infrastructure! Thank you for your time and leadership! @ASCEGovRel #ASCE2DC pic.twitter.com/b4ZI47DHy6

Thanks to the offices of @SenJoniErnst and Representative @daveloebsack and their staff for taking the time to talk infrastructure in Iowa today! #ASCE2DC pic.twitter.com/NdizkspWQU