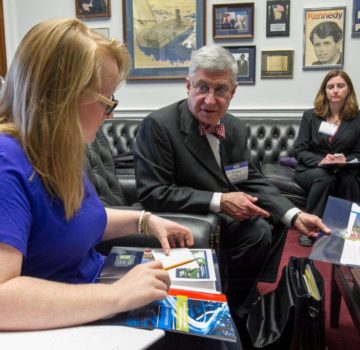 Last March, against the backdrop of the Frederick Douglass Memorial Bridge in Washington, D.C., ASCE released its 2013 Report Card for America’s Infrastructure, giving the nation’s infrastructure a grade of D+.  The bridge, which was declared “structurally deficient” by District of Columbia engineers, is in desperate need of $905 million to replace it with a new 6-lane bridge. ASCE believes that many of our nation’s infrastructure problems are solvable if Congress commits to making the necessary investments of approximately $3.6 trillion by 2020.

Carrying the message for the need to invest in infrastructure, over 200 Society members from 44 states in the Union arrived in Washington, D.C., for ASCE’s 14th Annual Legislative Fly-In taking place March 18-19. Speaking directly with key members of Congressional staff from their respective districts, Society members demonstrated their interest in public policy and their commitment to building important personal relationships with the leaders who make the nation’s policies.

Making the task even more challenging this year, members of the 113th Congress have made limiting government spending and reducing the national debt a priority, heightening the scrutiny placed on all federal expenditures to update and replace our nation’s infrastructure.

“The partisan nature of Congress, coupled with this being an election year, makes for a very difficult environment for much-needed legislative action,” said ASCE President Randall “Randy” S. Over, P.E., F.ASCE, to the attendees of the Fly-In. “We must make it clear [to members of Congress] that infrastructure is a vital and important function of the federal government and without a robust infrastructure the nation’s economy cannot hope to grow and expand. Our job [at the Fly-In] is to hammer home that message by making the case for infrastructure.”

“You are the ones out there doing the work to help America’s infrastructure continue to move forward,” said Anthony Foxx, U.S. Secretary of Transportation, who addressed the Fly-In attendees. “What I want to say to you is that for whatever reason, there’re folks out there who believe and say that by not spending money on infrastructure we are saving money, and that is not true. And you are the ones who have put [the] framing around this issue that has allowed us to begin having that conversation nationally – that we need to invest in infrastructure.”

We Must Now Use That Voice to Move Forward

“We must make it clear [to members of Congress] that infrastructure is a vital and important function of the federal government and without a robust infrastructure the nation’s economy cannot hope to grow and expand,” says ASCE President, Randall “Randy” S. Over, P.E., F.ASCE. Photo Credit: David Hathcox

Over explained to the attenedees that ASCE’s lobbying efforts over the past 15 years to bring the state of our infrastructure to the attention of our elected officials have given ASCE a major voice on Capitol Hill. Through the release of 5 Report Cards, the commissioning of 5 Failure to Act economic studies, the past 13 Fly-Ins, and the thousands of individual meetings and contacts that ASCE members have had with members of Congress and their staffs, the Society’s message is now being heard.

“We must now use that voice to move forward,” stressed Over. “Specifically this week [at the Fly-In] we will focus on what is on Congress’ agenda – the state of the Highway Trust Fund as well as MAP-21 [the Moving Ahead for Progress in the 21st Century Act], the reauthorization of the nation’s surface transportation programs.”

“What you are doing here [at the Fly-In] is so important, in terms of going up on the Hill and talking to your members of Congress,” added Homer Carlisle, majority professional staff member on the Senate Committee on Banking, Housing, and Urban Affairs, who spoke in a panel discussion at the Fly-In. “There is no more effective voice in terms of shaping the policy or the direction of the bill than talking directly to your member of Congress or members of their staff. Your enthusiasm is very important.”

Murphie Barrett, staff director for the House of Representatives Subcommittee on Highways and Transit, agreed.

“What can you do by going up on Capitol Hill?” Barrett asked the attendees. “First and foremost is education; it’s about coming up here, meeting your members of Congress, and explaining to them from your perspective what the value is of these surface transportation programs – what does it mean to their district, and what does it mean to their state.

“Your Report Card is a great tool, so I would encourage you all to use it. Those efforts are going to be critical as we move forward with the [transportation] reauthorization process.”

Two key issues Society members discussed with Congressional staff on their visits to Capitol Hill were, first, that of urging Congress to identify a long-term sustainable funding solution for the Highway Trust Fund and to complete their work on writing and passing a multiyear reauthorization bill for the nation’s surface transportation programs, which is set to expire this fall. The second issue was to urge Congress to pass a final conference report on the Water Resources Reform and Development Act (WRDA) in coming weeks.

The Highway Trust Fund, which pays for all of the nation’s surface transportation programs – roads, bridges, and transit – is forecast to be insolvent by September, or perhaps sooner. The message Fly-In participants took to Capitol Hill was: if Congress allows the fund to run dry, the U.S. economy will lose jobs, infrastructure projects will stop, and productivity will come to a halt. To fix this problem, ASCE supports a long-term, sustainable revenue solution to keep America competitive; among the options for this are a gas tax, a sales tax, corporate tax reform, or a mileage-based user fee. On top of that, MAP-21 expires on September 30, and Congress is beginning work on a new surface transportation bill.

“We are rapidly approaching a Highway Trust Fund that is facing insolvency, and I want to thank ASCE for framing a topic that I have been raising for almost my entire tenure as U.S. Secretary of Transportation,” noted Foxx, who served as the mayor of Charlotte, North Carolina, from 2009 to 2013.

“I use the phrase infrastructure deficit to describe this. [It means looking] at it from the standpoint of the economy, and the fact that anytime there is an expenditure of money in government today, there is a lingering question as to how [it] relate[s] to our deficit and how it relates to the amount of spending that we are doing and our ability to repay that spending. And what [ASCE] has given us is a frame to understand our lack of investment in infrastructure from the standpoint of what that means to future generations.”

The House passed its version of the Water Resources Reform and Development Act on October 23, 2013, and presently a joint House-Senate conference committee is working out a compromise version to be approved by both houses. Three key points ASCE members stressed in their meetings on Capitol Hill were (1) the Water Resources Reform and Development Act would create a national Levee Safety Program, (2) it would reauthorize the National Dam Safety Program, and (3) it would restore trust in the Harbor Maintenance Trust Fund.

“For me, the Fly-In was an opportunity to build relationships with my members of Congress and Congressional staff and show them that we are a valuable resource for infrastructure-related issues,” says Serge Haddad, P.E., M.ASCE, a member of the ASCE Los Angeles Section’s Government Affairs Committee and a former Section president. “If you are successful in building that relationship it will not only lead them to call you on infrastructure-related issues but it also leads to other opportunities, such as [members of Congress] getting involved in K-12 outreach in our district, E-Week events, and the Popsicle Stick Bridge Competitions that the Los Angeles Section annually does, and that is key to this event being successful.

“Brian Pallasch [ASCE’s managing director of Government Relations and Infrastructure Initiatives] and his team do a phenomenal job of preparing us [at the Fly-In] with what issues are at the forefront and preparing us with what to expect in our conversations with our members or staff on Capitol Hill.”

Region 8 board member Kristina L. Swallow, P.E., M.ASCE, agreed and felt she had a very positive meeting with staff from the office of Representative Joe Heck [R-NV].

“All of the Congressional staff members that we met with were generally supportive of infrastructure investment and understand the importance of funding it at the appropriate level,” she said. “We talked a lot about having Congress complete work on passing a multiyear reauthorization bill for the nation’s surface transportation program and how we are going to pay for it. And together, we came up with some creative ideas to fund it without raising the gas tax so it sounded like they were thinking about it and trying to come up with solutions.”

“We tried to get the message across to our members of Congress that infrastructure is being used and we have to convince the public that they have to pay a little more because they have not been paying enough in the past, and that is a very difficult thing to do,” said Jay Higgins, P.E., F.ASCE, past president of the Los Angeles Section. “I really felt that thanks to the Fly-In orientation we received, I had a better idea of the Water Resources and Reform Development Act and the serious issue of the insolvency of the Highway Trust Fund.”

“You are the ones out there doing the work to help America’s infrastructure continue to move forward,” said Anthony Foxx, U.S. Secretary of Transportation. Photo Credit: Department of of Transportation

With the latest forecasts from the Congressional Budget Office showing that the Highway Trust Fund could become insolvent by late summer of this year – which would cut annual federal highway investment from $41 billion to $6 billion and annual transit investment from $11 billion to $3 billion – Foxx said there is still reason to believe that Congress will come up with a solution to avoid insolvency. And he believes Congress can complete work on a new multiyear reauthorization surface transportation bill.

“There are three reasons for optimism,” concluded Foxx in his remarks. “First, one of the things that we have maintained is the bipartisan nature of this issue. It is very important over the next several months that we remind folks that this is not a partisan issue; this is an issue of quality of life, commerce, job growth, and really laying the foundation of the 21st century economy. The good news here is that we are in the same zip code [the administration and Congress] and are not talking past each other on this issue, and this is a conversation that we are eager to have.

“The second reason for optimism is that the President is leaning hard [in support] of this issue. One big part of our plan is doing what the President has been talking about for several years, and it is “fix it first” – working on the major maintenance needs in this country including road and bridges and other systems.

“And the third reason for optimism is that we have an abundant faith in the American people. They see what is happening, and not just in Washington but they see what is happening in their own communities where travel times are growing. But the watchword of the 21st century is giving people more [transportation] choices; but to do that we have to give people more resources.”