ASCE Leader Works to Get Her Hometown Through the Flood 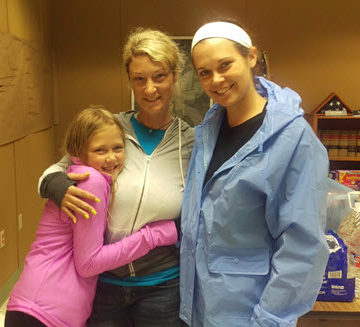 “This woman (middle) owns the local daycare, adjacent to our City Hall. She opened her doors so we could cook and donated a lot of what went into the gumbo, then allowed families to come in so the kids would have toys and TV. We wouldn’t have been able to prepare hot food onsite without her. The little one is my daughter. She entertained kids, encouraged kids, and wrangled dogs. She also made sure I knew when new arrivals came in and made sure they had food and anything else we could help them with.” – Kate Osborn (pictured right)

Texas Section Second Year Director-at-Large Kate Osborn, EIT, A.M.ASCE, has been working on little to no rest all week.

The ASCE Southeast Texas Branch President-Elect and project engineer for Schaumburg & Polk Inc. has long been committed to helping her hometown of China, TX. She’s a city councilwoman there and a founding member of the China Community Action Group.

So when Hurricane Harvey rains arrived there Monday, she sprung into action. She’s kept citizens informed, while also volunteering in a makeshift emergency shelter, coordinating donations, feeding evacuees, assisting those in need, and sharing their stories through social media to garner invaluable support.

“My community is in bad shape,” she wrote. “About half of our school district is flooded out of their homes. City Hall became a makeshift emergency shelter today. We had no supplies, so the community donated everything people needed. Towels, blankets, clothes, pillows, food – we made a huge pot of gumbo at the daycare (in the City Hall building).

“Several of the ingredients were donated by one of the refugee families. They’ve lost nearly everything, but they gave what they had. The woman who cooked the gumbo has multiple leaks in her roof, and her front stairs collapsed when she ran home to empty buckets. She fell and scraped herself up, but came back anyway to make sure everyone was fed. Our constables were declared nonessential personnel, ineligible for overtime – they showed up anyway. 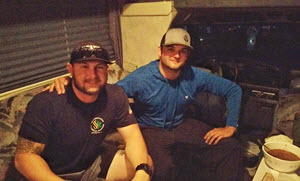 “These guys go to school in Fort Worth. One is a farmer taking business classes, and one is a paramedic taking nursing classes. They heard on the radio that boats were needed for rescues, decided school could wait, and packed their bags. They drove to the nearest edge of water and started rescuing. They’ve worked their way across the disaster zone saving lives. Today they were in Nome/Sour Lake (the highway between is underwater enough to run a boat down). Tomorrow they will be in Port Arthur. They planned to sleep in the cab of their truck again and wanted a place to park. We told them to sleep in our camper. They got here, got settled in a little, and ate deer chili. They refused the offer of a warm shower and tried to pay us for letting them stay here. They’re risking their lives to save people and they tried to pay us. ” – Kate Osborn

“The last dropoff before I left at six was a woman. She called this morning at 10 for rescue. She sat in her flooded house all day until someone could get to her, then climbed into a boat to ride miles in the high winds and driving cold rain. She got there, signed in, sat down, stood back up, and started bawling. I gave her a hug and her skin was like ice. She was crying because she was so happy to be safe, but she’s still very worried about her neighbors who declined to leave. She got a bowl of hot gumbo and politely interrupted conversation to pray before she ate.

“I’m blessed to be a part of this community. I’ve lived many places and finally found one to call home. We’re hurting right now though. So many have lost everything and most don’t have flood insurance because we aren’t in the flood plain.

“These guys (Jordan Munns, Sam Haught, PJ Brown, and Daniel Munns) came from Florida, where they operate Wild Florida Airboats tours in Saint Cloud. They heard there was a need in Texas, packed bags, and headed this way. My husband and I went to where these guys were parked on our way in. They were gone! We found them at the gas station, and I walked up to one of their windows. I said “I heard y’all were looking for a place to stay the night. I’ve got one.” They had no idea who I was or how I found that out, but the relief on their faces was a beautiful thing to see. Toni Rinehardt, who opened her daycare and helped cook at the shelter, and her husband also graciously agreed to host them for the night. They’d spent the night before sleeping in their truck cabs and weren’t super excited about doing it again after spending the day in the cold rain, wind, and water. After driving this far and doing so much for our community, they were grateful to us for providing a place to sleep. It’s such a small way to pay the debt of gratitude we owe them. Y’all, take a good look. These six people are everyday heroes. They live their lives like normal, then when a need arises, they answer the call like superheroes. I can’t thank them enough.” – Kate Osborn

“It’s going to keep getting worse here too. … Our local bayous don’t usually peak until a few days after the rain stops. That’s when upstream basins start to empty.

“My house is mostly dry, and my family and I are doing well physically. I’ve been through flooding and lost everything twice, and now I’m seeing my friends and neighbors going through this. My emotions are kind of a wreck right now, but this is what life is made of.”