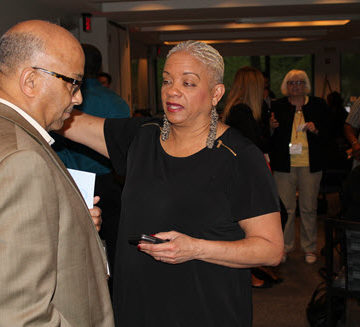 The 50K Coalition started the conversation between a variety of organizations and universities to work toward the goal of 50,000 minority engineers graduating annually by 2025.

ASCE headquarters in Reston, VA, played host this week to what may be a turning point in the development of the engineering workforce.

“This is a seminal moment,” said Karl Reid, Ed.D., executive director of the National Society of Black Engineers. “This is the week we will look back on as the moment we mobilized a coalition to markedly change the face of engineering.”

The 50K Coalition Collective Impact Workshop, funded by a generous grant from the United Engineering Foundation, brought together leaders from engineering associations, diversity and inclusion organizations, universities, and corporations to discuss issues and strategies surrounding the 50K Coalition, a drive to have 50,000 diverse engineers graduating annually by 2025.

“This framework allows for the individuality of the different associations but also makes sure that we’re all dealing with the complete picture,” said NSBE National Chair-Elect Matt Nelson.

“The 50K Coalition is working on a complex and critical issue for our profession and country,” said ASCE Executive Director Thomas W. Smith III, ENV SP, CAE, F.ASCE. “ASCE was proud to host the kickoff meeting and looks forward to working with the coalition to address a challenge that can only be solved by a concerted and collaborative effort.”

For NSBE, the 50K Coalition’s goal is an extension of its mission to triple the number of African-American engineers by 2025. “What the 50K does is it expands, it amplifies the work that NSBE is doing,” Reid said. “We felt that we can’t solve this problem alone. We’ve got to build partnerships.”

The workshop included presentations and breakout work sessions, with groups brainstorming ideas in areas including funding, marketing, education, and the importance of changing the culture.

“The country is in need of technical talent. There are enormous gaps in the STEM workforce that are forecast over the next decade. Those need to be filled to maintain our economic competitiveness, national security, and quality of life,” Reid said.

“We’re not producing enough engineers. We need to tap every single population where there’s talent. So the goal of this coalition is to dramatically increase the number of engineers this country produces from populations that are severely underrepresented. Underrepresented populations are talent wasted.”