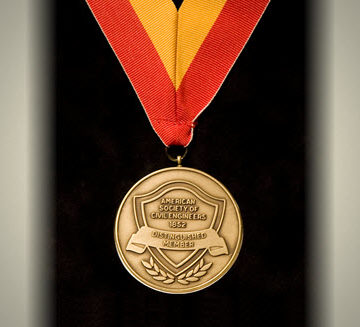 George E. (“Edd”) Gibson Jr., Ph.D., P.E., Dist.M.ASCE, NAC considered the foremost expert in front-end planning of capital facilities in academia, has been honored by ASCE with inclusion in its 2020 class of Distinguished Members for the huge impact of his contributions across all industry sectors.

Through his publications, presentations, seminars and development of decision-support tools, Gibson’s work has saved the construction industry billions of dollars by way of improving capital effectiveness. Since 1991, his body of research work has significantly increased the awareness and implementation of best practices for front-end in the United States and the world. As part of these efforts, he has been the driving force behind the Construction Industry Institutes’ (CII) suite of five Project Definition Rating Index (PDRI) tools, and has regularly taught executive training courses on their implementation.

Gibson was also instrumental in developing the Front End Engineering Design (FEED) Maturity and Accuracy Total Rating System (MATRS) tool and the Integrated Project Risk Assessment (IPRA) tool; in addition, he has consulted with over 70 organizations. These consulting activities, particularly for project owners, include application of the PDRI analysis to many large-scale projects. He has thus taken an essential problem (assessment of projection definition) through conceptualization, model building, system development, testing, implementation, verification and training.

He is an expert in educational leadership, having held a variety of successful academic management positions for over 19 years. With Arizona State University’s Del E. Webb School of Construction beginning in 2009 as program chairman, it was not long until he was appointed director of the School of Sustainable Engineering and the Built Environment (SSEBE), growing this enterprise from infancy to its dynamic standing today. As director, he guided programs containing over 1,700 students, hired 40 faculty members, facilitated research expenditures growth by 140 percent, led development and significant fundraising for a new 130k gsf building, started three new degree programs, and raised over $23 million in donations. Currently he is a professor and the Sunstate Chair of Construction Management and Engineering in the School.

During his career, Gibson has served as PI or Co-PI on over $10.8 million worth of funded research from a variety of sponsors. His research and teaching interests include front-end planning, organizational change, asset management, earned value management systems, alternative dispute resolution, safety and prevention through design, and risk management. He has also taught over 215 short courses to industry, published over 240 reports and articles and held academic leadership positions at the University of Alabama and University of Texas. He recently served as a visiting academic fellow at the University of Cambridge (U.K.).

As his career progressed, Gibson began serving in a number of roles on national and international committees. He was on the Board of Governors of ASCE’s Architectural Engineering Institute from 2004 to 2008, and was its president in 2006-07. He has been active in numerous other committees, including leadership roles with the National Academy of Engineering, National Academy of Construction and CII.