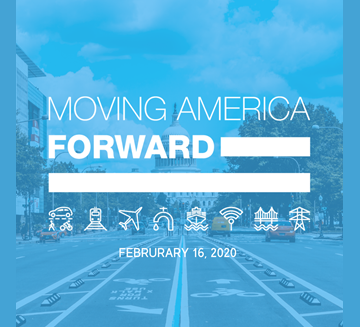 Maylinn Rosales, past-president of the Nevada Section, has been working on issues of infrastructure advocacy for her entire professional life. She’s attended the last seven ASCE Legislative Fly-Ins in Washington, D.C. and played a key role in the “2018 Report Card on Nevada’s Infrastructure.”

But this year’s work is different. This year is special.

Rosales, who emigrated from Nicaragua to the United States in 1999, received her U.S. citizenship late last year. Now, after years of lobbying her elected officials to invest in America’s infrastructure, she finally gets to have a say in who those elected officials are.

“It’s a great feeling to be an active participant now,” said Rosales, P.E., M.ASCE, a project manager for the city of Henderson, just outside Las Vegas. “I’ve been diligent about paying attention to what all the different candidates are saying. I’m really trying to be informed, so I make the most out of it.”

Perfect timing then for Rosales and voters across the country that ASCE helped organized the first-ever presidential candidate forum focused on infrastructure issues, Sunday, Feb. 16, on the campus of the University of Nevada, Las Vegas.

Presidential candidates Vice President Joe Biden, Mayor Pete Buttigieg, Senator Amy Klobuchar and businessman Tom Steyer discussed the future of the nation’s infrastructure at “Moving America Forward: A Presidential Candidate Forum on Infrastructure, Jobs, and Building a Better America,” an event put together by the nonpartisan nonprofit organization United for Infrastructure, of which ASCE is a host committee member.

“I think everyone is an issues voter,” Rosales said. “You pick what’s important to you and that’s how you vote. For me, infrastructure is obviously what I do, so it’s very important.”

The forum was moderated by The Wall Street Journal’s Executive Washington Editor Jerry Seib and Deputy Washington Bureau Chief Jeanne Cummings and included questions from voters from Nevada, as well as many submitted in advance by ASCE members.

“Today’s conversation with the presidential candidates on critical issues facing every American from wastewater and drinking water infrastructure to fixing the Highway Trust Fund demonstrated that there is clear recognition of infrastructure as a priority for the next administration and the American people,” said Tom Smith, ASCE executive director. 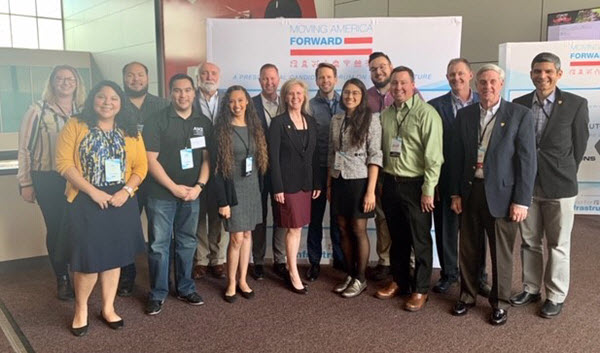 More than 50 ASCE members from around the country traveled to Las Vegas for the forum.

ASCE members flocked to the event from around the country, excited for the chance to take part in the infrastructure conversation on a national level. ASCE was estimated to have had the largest audience contingent of any of the partner organizations.

Kenneth Rosenfield, P.E., F.ASCE, who attended from the Los Angeles area, where he is a vice chair of the ASCE Region 9 Board of Governors, called it a “Who’s Who of ASCE” – from former ASCE President Kristina Swallow, P.E., ENV SP, Pres.18.ASCE, to Region 9 Director Kwame Agyare, P.E., ENV SP, M.ASCE, to Technical Region Director David Odeh, P.E., S.E., F.SEI, F.ASCE, to many other Society and Younger Member leaders.

“It was totally exciting to have presidential candidates talking about infrastructure for 35, 40 minutes at a time, instead of it just being maybe a tagline in a speech,” said Rosenfield, who has been working for more than 15 years on ASCE advocacy. “And the questions were great. They covered a wide range of infrastructure topics.”

Candidates discussed their infrastructure agendas, climate change, disaster resilience and the challenges of modernizing current infrastructure systems. All the leading candidates from both parties were invited to participate in the forum.

Vice President Biden name-dropped ASCE in one of his responses.

“The issue that we’re achieving is informing the public about the importance of infrastructure, so that they can inform their elected officials,” Rosenfield said. “We’re so uniquely qualified to do that because civil engineers are experts in infrastructure. It’s just very important.

“ASCE obviously has made great strides nationally with the success of the Report Card. And, look, finally presidential candidates are talking about infrastructure.”

Which was the point.

More information from the candidates about what they will do about infrastructure makes for a more educated voter.

Whether it’s your 40th time entering the voting booth or your first.

“It was nice to get the candidates’ views on infrastructure in more depth,” Rosales said. “They always touch on it. No one’s going to say they don’t want better infrastructure for the country. So that’s usually an easy one for them. But in the forum, they got more in-depth on how they’re going to pay for it.

“I got to hear it firsthand. I got to see how they responded to the question, how they interacted with the crowd. It was great to be a part of something like that.

“It definitely made me more informed.”