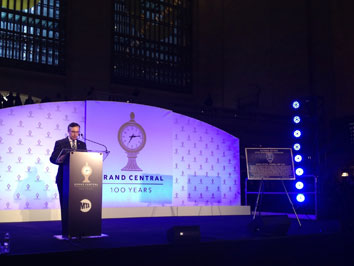 Heralded by the West Point Brass and Percussion Band performing “Grand Central Centennial Fanfare,” a new piece commissioned for the occasion, the centennial celebration of New York City’s storied Grand Central Terminal kicked off on February 1 with a rededication ceremony that included the terminal’s dedication as a Historic Civil Engineering Landmark.

Commonly known as Grand Central Station, the commuter rail terminal station at 42nd and Park Avenue in midtown Manhattan is considered one of the most elaborate and majestic buildings constructed in the 20th century. So much so, that British historian Sir David Nicholas Cannadine recently dubbed Grand Central “the world’s loveliest station” and “a symbol of America’s gilded age.”

“While Grand Central Terminal has long been recognized as an architectural landmark, it also represents a triumph in civil engineering,” said ASCE President Gregory E. DiLoreto, P.E., F.ASCE, “a fact that normally goes unnoticed because much of the engineering work that went into the design and construction of the Terminal is hidden from public view.”

As part of the Grand Central Terminal Recognition Ceremony DiLoreto unveiled an ASCE Historic Civil Engineering Landmark plaque, which will be placed in the main terminal of the station.

According to DiLoreto, Grand Central Terminal was recognized by ASCE’s History and Heritage Committee as a National Historic Civil Engineering Landmark because of the many unique features that set it apart from other civil engineering projects.

The project was originally conceived by William Wilgus, chief engineer of the New York Central Railroad and a member of ASCE, and designed by the New York firm of McKim, Mead and White. Grand Central, according to the October 2011 issue of Travel + Leisure magazine, was listed as the 6th most visited tourist attraction in the world, attracting 21,600,000 people a year. Grand Central was designated a New York City Landmark in 1967 and a National Historic Landmark in 1976.

“Yet,” noted DiLoreto, “the beauty of this architectural and civil engineering marvel was almost destroyed. If not for the advocacy of thousands of citizens [in 1968], including Jacqueline Kennedy Onassis, this terminal would have been radically altered to allow for the construction of a 50-story skyscraper above the area where we are standing today. Instead, the fight to save this terminal ended with a decision by the U.S. Supreme Court in 1978 that upheld its landmark status, and its future was preserved.”

In 1998, the terminal was restored to its original splendor with the completion of a two-year, $196 million restoration project that included cleaning the main concourse’s sky ceiling, constructing a new east staircase, and converting the main waiting room into an exhibition hall. The restoration work was financed by the addition of 65,000 square feet of retail space with new restaurants and a dining concourse on the lower level.

Aside from DiLoreto dedicating the site as an ASCE Historic Civil Engineering Landmark, Grand Central received special honors at the ceremony from the Guinness Book of World Records, the U.S. National Park Service, the National Railway Historical Society, and the U.S. Postal Service with the release of a new postage stamp.

ASCE’s Historic Civil Engineering Landmark Program was created to recognize historically significant local, national, and international civil engineering projects, structures, and sites. To date, more than 250 projects worldwide have earned this prominent designation. Among them are the Hoover Dam, the Eiffel Tower, the Suez Canal, the Statue of Liberty, the Panama Canal, and the Golden Gate Bridge.