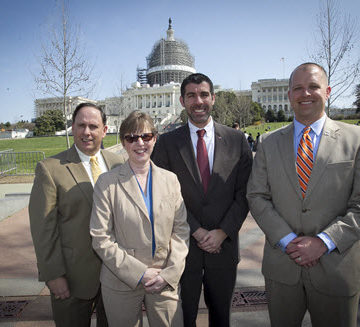 Key Contacts influence the policy process at the state and federal levels by sharing their everyday civil engineering experiences and developing relationships with elected officials.

“The most rewarding part … is feeling that you can make a difference or be heard,” said Jim Pajk, a Federal Advocacy Captain from Ohio and winner of the 2016 Outstanding Civil Engineer Advocate of the Year award. “It may take numerous meetings or discussions, but I have found eventually I can make an impact.”

If ever there was a time for ASCE members to become Key Contacts and take part in public policy conversations going on across the country, it’s now. The next six to nine months will provide a number of high-profile opportunities for the Society and its membership to positively affect public policy decisions affecting infrastructure investment.

This tumultuous election season presents a unique opportunity to influence government policy at all levels. Then in February, ASCE’s giant-screen film Dream Big: Engineering Wonders of the World premieres and is sure to inspire the next generation of civil engineers.

Next spring, a new edition of ASCE’s acclaimed, widely cited Report Card for America’s Infrastructure will alert the public and lawmakers, including a new presidency, to the state of America’s infrastructure in 2017. The release will be timed to ASCE’s annual Legislative Fly-In, which invites all Key Contacts to Washington, DC, to discuss infrastructure with members of Congress and White House officials.

For the recruitment campaign, a number of ASCE Key Contacts talked about why advocacy matters to them and to the profession, and shared rewarding experiences they had influencing public policy:

Learn more about becoming a Key Contact and how to get started.