ASCE 2016 Convention Kicks Off With Shades of Hollywood 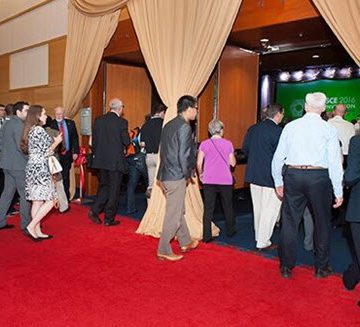 The only thing missing was the paparazzi.

The ASCE 2016 Convention got underway Wednesday night with a movie-premiere style opening welcome reception worthy of Hollywood’s finest. Members who walked the red carpet of the Oregon Convention Center in Portland were treated like “stars” of the Society. Following some mingling, attendees were treated to a rough-cut screening of Dream Big: Engineering Our World, ASCE’s giant-screen film that will premiere in February.

“I’m excited about it,” said Phil Burgi, P.E., D.WRE, Dist.M.ASCE, “I’m very pleased that ASCE was able to get us an early preview of the film. It’s really icing on the cake for people to get here early for the Conference and then be able to see it.”

View a slideshow of Convention highlights from Day One 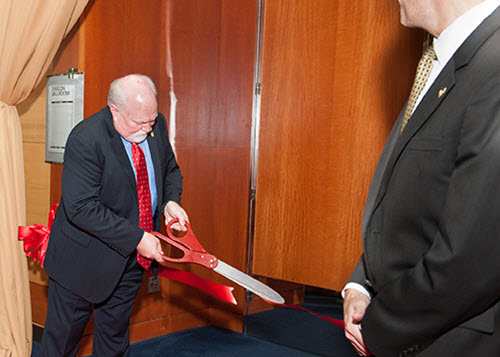 “I was nervous,” admitted MacGillivray about showing a film on engineering to a room of engineers. “The main objective that we’ve had is to try to explain what engineers do and why they make our lives safe, and to entice young women and young men to become engineers. And I think the film will do that.”

He added, laughing, “And the final version will be at least 100 times better.” 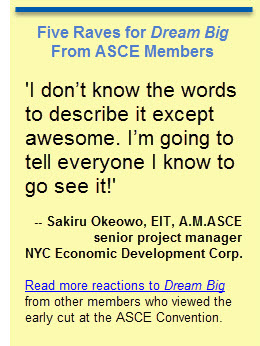 As the film showcased a variety of engineering projects, people, and disciplines, the audience of Convention attendees roared with laughter and cheered with applause in all of the right places.

“When it started, I had tears in my eyes,” said Pat Natale, P.E., CAE, NAC, Dist.M.ASCE, who served as ASCE’s executive director when Dream Big began as an idea more than a decade ago. “The message was really strong. The film talks about changing the world, and that’s really what we do as civil engineers.”

The opening welcome reception was just the beginning of ASCE’s big event in Portland. Short courses started in the morning – an Envision credential workshop, along with a study of lessons learned from the Tohoku Earthquake and Tsunami of 2011, and a deep dive into low-impact development in stormwater management.

Several attendees worked on the convention’s community service project, repairing a Portland creek trail. Many others learned about the City of Roses through the Convention’s technical tours.

“I always run into people I know,” said James Zavoral, A.M.ASCE, a student at the University of Wisconsin, of his Convention experiences. “And without fail I’ll meet someone new who I’ll end up keeping in touch with.”