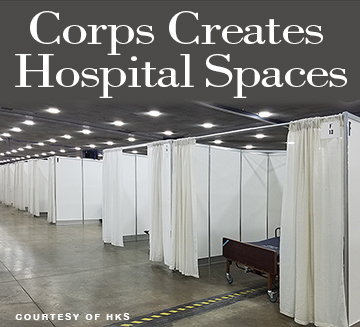 AFTER COVID-19 took hold in Wuhan, China, leading to a lockdown of the city of 11 million on January 23, Chinese officials made headlines by announcing that the country had built two hospitals with a total of roughly 2,300 beds in less than two weeks.

The prospect of something similar playing out in the United States seemed far-fetched. But in March the epicenter of the COVID-19 pandemic moved to the United States. The need for additional beds, especially in hard-hit cities such as New York, became urgent.

Now as Americans are trying to flatten the curve via social distancing and placing a virtual freeze on the economy, engineers and builders are quickly trying to expand the number of beds available to support a health-care system that is likely to be pushed beyond its limits in the coming weeks.

According to the American Hospital Association, there are 924,107 staffed beds in U.S. hospitals. As more Americans contract the virus, some will require hospitalization. Estimates of how many new beds will be needed vary by state and will be affected by a variety of factors, including the success of social distancing as well as the number of beds that may be freed up as elective surgeries are temporarily suspended. But Chad E. Beebe, AIA, CBO, CHFM, the deputy executive director for advocacy for the American Society for Healthcare Engineering, estimates a need for 20 to 30 percent more capacity nationwide. If this proves true, about 200,000 or more new beds will be needed.

Attempting to meet that demand will require identifying a variety of existing spaces, accelerating construction timetables, expanding capacity at existing hospitals, and in some cases, relying on modular construction.

Future articles will investigate many of these options; this article will focus on the work being done by the U.S. Army Corps of Engineers to convert existing spaces to accommodate the needs created by COVID-19.

The U.S. Army Corps of Engineers has emerged as the lead public-sector agency in the current effort to increase the number of beds. The Corps’s plan is straightforward—establish guidelines for the rapid conversion of existing facilities with significant space that are now sitting empty: hotels, college dorms, arenas, and convention centers. In a press conference on March 20, the Army Corps’s chief of engineers and commanding general, Lt. Gen. Todd Semonite, P.E., M.ASCE, said, “This is an unbelievably complicated problem, and there’s no way we’re going to be able to do this with a complicated solution. We need something super simple. Our concept is a standard design.”

“This is an unbelievably complicated problem,
and there’s no way we’re going to be able to
do this with a complicated solution.”
—Lt. Gen. Todd Semonite, P.E., M.ASCE

According to published guidance issued by the Corps on March 22 (Alternate Care Sites [ACS] Implementation Support Materials), these ACSs are “best suited to provide general, low-level care for mildly to moderately symptomatic COVID-19 patients. This includes patients [who] may need oxygen (less than or equal to 2 L/min), who do not require credentialed nursing care, and who can generally move about on their own. The level of care will be determined by the local jurisdiction based on the availability of medical personnel and supplies.”

States are trying to hit moving targets in estimating how many people will be sick, when they will become sick, and the underlying health of the entire community. The ACS sites might include a mix of COVID-19 and non-COVID-19 patients or be entirely set up for one group or the other.

During this buildup, the Army Corps is working at the behest of the Federal Emergency Management Agency (FEMA). States send FEMA lists of sites that could be converted, and the Corps completes quick site evaluations. If the state chooses to move forward with a site, the Corps becomes the contracting entity for that site.

Many states are expected to see peak demand for beds in April. As of April 10, the Army Corps had completed 963 site assessments, out of 1,135 requested. Twenty-three contracts for ACS construction had been awarded, and another 13 were pending. All told, this effort would result in an additional 16,325 beds.

The Corps has engaged more than 17,000 personnel on the work, including 2,143 deployed from districts around the country that haven’t been hit as hard by the pandemic.

“We chose Javits Center because we already had an infrastructure there,” says James D’Ambrosio, the spokesperson for the Army Corps of Engineers, New York District. “You got your electricity, you got your [heating, ventilation, and air-conditioning], you got your space, you got your climate control, you got your furniture.”

The space was large enough to lay out hundreds of patient-care units as well as space for nurses’ stations, medical equipment and infrastructure, and back-of-house services such as food and linens. “We have to replicate everything you might see in a hospital floor,” says D’Ambrosio. “It doesn’t have to be perfect; it has to be adequate to meet the demand because the New York City hospital system is under terrific strain right now.” By April 9, the center was seeing fewer than 200 patients, as social distancing and other measures succeeded in helping the city flatten that curve of critical patients.

The Army Corps is also quickly erecting a 1,000-bed, climate-controlled tent hospital on the campus of the State University of New York at Stony Brook. The facility, under construction by about 150 workers, will include an access road, water-control systems, and portable toilets and showers along with a generator to power its climate-control systems and electricity. The space will serve non-COVID-19 patients to free up room in the region’s hospitals for more critically ill sufferers.

Moving with the Virus

The Army Corps is also overseeing the conversion of two convention centers in the Detroit area. The first is the downtown TCF Center. The second is a retrofit of a community convention center in suburban Novi, Michigan, roughly 25 mi northwest of the Motor City. 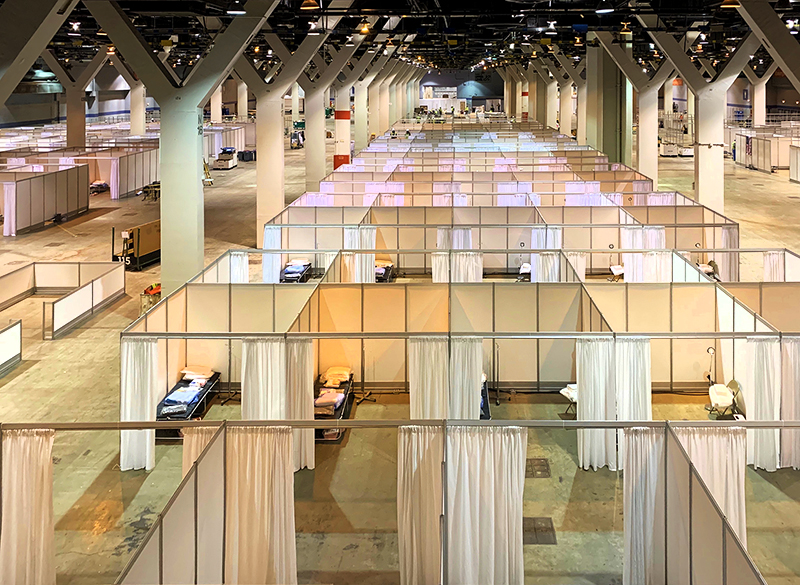 The Army Corps of Engineers is prioritizing large spaces, such as the McCormick Place convention center in Chicago, because they can be converted quickly. (Photograph courtesy of Walsh Construction.)

One of the subcontractors on the job, Dallas-based design firm HKS, received a contract from the Corps late in the evening of April 5. By the next afternoon, building materials were being ordered for construction. By 5 a.m. on April 7, work was under way. It has been going 24 hours a day, seven days a week ever since. “We are rocking,” says Jim Whitaker, FAIA, FDBIA, a principal and the director of government and alternative project delivery for HKS.

In the case of the Novi job, Whitaker says the contract was pretty basic: deliver 1,100 beds by April 20. Obviously, speed has been a priority. There has been no iterative process. Instead, Whitaker says, “This is: Talk about it, draw it on the floor, draw it on your arm, draw it on the wall. ‘We’re going to order five of these, two of those. You’re going to Home Depot, you’re calling your supplier, see you back here in twenty minutes.’”

“We are rocking … This is: Talk about it,
draw it on the floor, draw it on your arm,
draw it on the wall.”
—Jim Whitaker, FAIA, FDBIA, principal
and the director of government and
alternative project delivery for HKS

The work has made communication and teamwork essential. “If you ain’t on the team to play ball, you can hit the bricks,” says Whitaker.

Large spaces such as convention centers have proved challenging for providing negatively pressurized air, which is essential to protect health-care workers treating COVD-19 patients. “We’re trying to understand how we can make more negative-pressure units available,” says Nolan Rome, P.E., LEED AP, the U.S. health-care director and global health-care cochair of WSP USA, which has some 10,000 employees at more than 150 offices across the United States. “In order to suck all that air out, we have to bring conditioned outside air back in. That varies pretty widely from site to site, but most are not set up for the volume of outside air we’ve been experiencing so far.”

One method is creating individual patient “pods” sealed with plastic barriers. Another uses ventilated headboards—which create negative-pressure “shrouds” around the heads of patients. These headboards are then ducted to exhaust machines, though Rome says this hasn’t been tried in the United States yet.

Still, as Whitaker notes, all the retrofitting work at facilities around the country is meant to be temporary. “When this is over, it all gets removed. Hopefully to God, there will be no need to do this again.”

Yet the Army Corps’s mobilization is just the beginning of efforts to increase health-care capacity in the coming weeks and months. Beebe calls the work a “safety net,” meant only to prepare large spaces “on the fly” in case they are needed. As the nation and the world head toward a future in which COVD-19 continues to reemerge, Beebe says, “We’re much better off utilizing our existing hospitals as best as possible.”

—T.R. Witcher is a contributing editor to Civil Engineering.