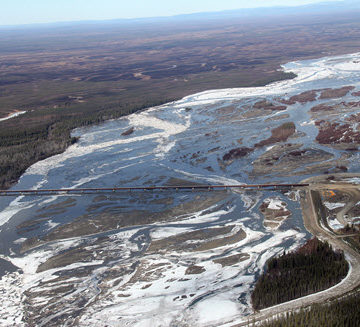 There was nothing standard-issue about the Tanana River Bridge project.

“It wasn’t a cookie-cutter bridge where we chose one of three superstructure options,” said Michael Pochop, P.E., vice president and project manager for Hanson Professional Services Inc., the company selected to design the bridge. “It wasn’t something that was automated. It’s something that took a lot of theoretical thought.”

How else could one figure out how best to build the longest bridge in Alaska, spanning a wild, braided river, amid extreme temperatures?

The 20-span, 3,300-foot crossing is the key component of Phase 1 in a four-phase project undertaken by the Alaska Railroad Corporation to expand its northern rail line and better connect the U.S. Department of Defense’s Joint Pacific Area Range Complex near Salcha, AK, to the rest of the state.

The bridge is one of six projects to be honored as finalists for the 2016 ASCE Outstanding Civil Engineering Achievement Award.

“We did a lot of pure design work to see how far we could stretch things,” Pochop said. “This was a unique, one-of-a-kind thing.”

The Joint Pacific Area Range Complex is a 1-million-acre military training ground that is well-placed to take advantage of Alaska’s terrain but also very difficult to access, isolated by the Tanana River. It was previously only accessible by air or winter ice roads. The Alaska Railroad Corp. brought Hanson, HDR Alaska, and Kiewit Infrastructure West Co. in to help solve that problem with a river crossing.

It was a daunting challenge.

“We worked together a lot. We knew we had to go 3,300 feet. So how were we going to split up those spans?” said Mat Fletcher, P.E., S.E., the engineer of record from Hanson. “Because it was so long, we wanted to have a structure that was repeatable. We needed to simplify it because it was going to be such a challenge to construct in those conditions.”

The river is prone to ice flows and logjams. And because the site was so isolated, transporting 80 girders 330 miles was no easy task. But the project succeeded, thanks in large part to the various hydraulics models and 3D physical models that aided in the design process.

“I feel we delivered a design that was as economical as it could be given the site conditions,” Fletcher said. “There weren’t a lot of changes that came about during construction. We had a good design.”