Alabama’s Richard Woodruff, a Member for 79 Years, Dies at 103 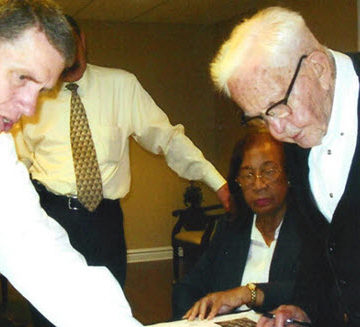 One of ASCE’s longest tenured members has died, a professional who continued giving of his engineering abilities to projects in Alabama long after retirement.

Richard Shaul Woodruff, who joined ASCE in 1937 as a student at the University of Alabama College of Engineering, died in Birmingham at the age of 103.

He achieved ASCE Life Member status in 1978, before the oldest of today’s Younger Members were even born.

Woodruff worked for 37 years at the Alabama Power Company, where he was manager of the Hydroelectric Plant Planning Section for Southern Company Services Inc. He was an executive engineer on hydro projects, including the Alabama dams: Logan Martin, Weiss, Walter Bouldin, H. Neely Henry, Lay, Smith, Holt, Bankhead, and R.L. Harris.

“He was a great inspiration and, I believe, a perfect example of what civil engineers should all aspire too,” said Shelia Montgomery-Mills, P.E., M.ASCE, president of the Alabama Section.

His contributions didn’t stop with retirement. He worked for nearly two decades as technical director and resident engineer for the Village Creek Society to solve long-term flooding problems in the Village Creek neighborhood of northern Birmingham.

“When no one else would or could act, Mr. Woodruff looked at the flooding as an engineering problem that could be solved within the means available,” Montgomery-Mills said. “His solution was to clean the channels and keep them clean initially and, long-term, to move pipes and bridge supports.”

One of Woodruff’s legacies in the area will be a walking trail in the Village Creek Watershed, which is now under construction.

“It’s going to be a real asset,” said Village Creek field director John Meehan, who worked with Woodruff for 20 years. “Something families can enjoy, and it was through his efforts. He did a lot. He just wanted to do something to improve the watershed.”

During the prime of his career, Woodruff was extremely active in ASCE, serving as secretary of the ASCE Power Division’s executive committee, president of the Birmingham Branch, and member of the ASCE Board of Directors, among many other roles.

“He was consulting on a feasibility study to install a generator at a small out-of-service dam and build a transmission line several miles to connect to the power grid,” Shultz said. “This was similar work to what he did in the ’40s for Alabama Power Company, but had been away from for many years.

“As was typical of him, he was very enthusiastic about the project and full of questions as to current practice.”
ASCE honored him in 1972 with the Rickey Medal, given annually to a Society member for outstanding hydroelectric engineering achievement.

“He never once stopped being an engineer,” Montgomery-Mills said. “Civil engineering is not a 9-to-5 Monday-through-Friday job. It’s a lifelong career and a way of life. Our commitment to the public is always on.

“Mr. Woodruff took on the mantle to serve the public when he graduated college, and he never stopped, after retirement and until he passed on.”

Woodruff was preceded in death by his wife, Gwendolyn Roberson, and is survived by two sons, Michael and Richard.