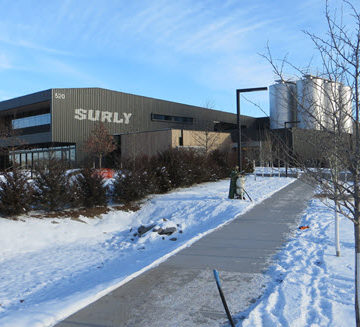 The attention on Minneapolis’ Surly Destination Brewery pours in from all over.

From the engineering community. From the craft beer enthusiasts. From … the dentist?

“When you tell people around town that you worked on Surly, your dentist knows what it is,” laughed Johanna Harris, project manager for HGA Architects and Engineers in Minneapolis. “The person at the grocery store knows what it is. Your kids actually think you’re cool for five minutes.”

Such is the success of the brewery, which recently received a Best Overall Project honor in the 2016 ASCE Architectural Engineering Institute Professional Project Awards.

“It’s been immensely satisfying both personally and professionally,” Harris said.

Surly craft beer has been a Twin Cities favorite for years. Surly founder Omar Ansari had broader ambitions, though, and began looking to develop a beer hall–tap room–brewery combination.

He found a prime location, too – right between Minneapolis and St. Paul, near the University of Minnesota, along bike paths and a new light rail line.

It was a contaminated site.

“When I first started working with him, I could not for the life of me understand why he would buy this site,” Harris said. “But Omar had this vision.” 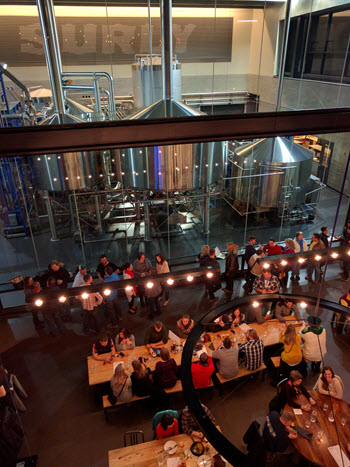 Harris and her team helped make it a reality.

The architects, structural engineers, and environmental engineers collaborated throughout the process to develop and install a sub-slab vapor barrier membrane and passive vent system to account for the 70-year-old industrial waste seeped into the ground.

The project also followed LEED guidelines, and much of the existing foundations at the site were recycled and incorporated into the design.

The lighting design also required collaboration from the architectural and engineering team as a series of LED lights are concealed in openings in the roof which help create a dramatic, theatrical feel to the space. The lighting also showcases the brewery’s gift shop, art gallery, and event space.

“This is one of these career-defining projects,” Harris said. “It’s so professionally satisfying to be at the hub of a team where every engineer and architectural team member is just working at the top of their game and profession.”

The AEI Professional Project Award competition focuses on the design and construction of high-performance buildings, including structural, mechanical, and electrical systems, as well as construction management and architectural engineering integration.

The projects were reviewed by a committee of 12 jurors, among them distinguished members of the design and construction industry and representatives from AEI’s Board of Governors and Academic Council.

The 2016 project and award recipients are: