David O. Prevatt, Ph.D., P.E., F.ASCE, an associate professor in the department of civil and coastal engineering at the University of Florida and a well-known researcher, has been named a Fellow by the ASCE Board of Direction.

Prevatt joined Simpson Gumpertz & Heger Inc., the Boston-based ENR 500 consulting engineering firm, in 1998, and for seven years worked on building envelope system design and remediation projects for contemporary and historic buildings. He earned his professional engineer’s license at SGH before joining the faculty at Clemson University for three years. 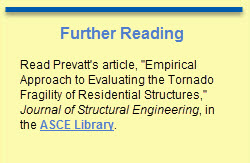 In 2007 he went to the University of Florida, where he has grown his wind engineering research program focusing on mitigation of extreme wind damage to low-rise construction. For the past six years that research has focused on improving our understanding of tornadoes and developing the framework design of tornado-resilient structures and communities. This work has involved multidisciplinary studies relating to the behavioral impacts of structural building failure in natural hazards.

He is recognized nationally and internationally for his research. He has applied his forensic engineering expertise in leading three major post-tornado damage investigations since 2011, and Prevatt has led a shift in thinking among the engineering professionals away from previously held notions that extensive tornado damage to single-family housing is inevitable. Over the past five years, his research has contributed to a better understanding of tornado-structure interactions and the development of tornado design criteria for low-rise structures. He has received research awards from the National Science Foundation, NOAA, and State agencies in Florida, as well as from private entities. In 2012, he received the Silver Medal from the Republic of Trinidad and Tobago’s National Institute of Higher Education, Research, Science and Technology for his contribution to engineering.

Prevatt has managed over $4.5 million in externally funded research projects and has published two monographs and 80 articles, 25 of them in peer-reviewed engineering journals. He earned his M.S. and Ph.D. degrees from Clemson University.