A Brief History of Architecture in Denver 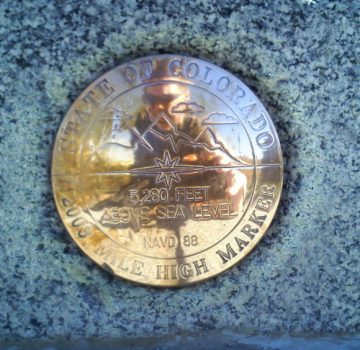 Touring Denver’s architecture is to study the evolution of architectural styles in the 20th Century. I recently visited Denver to have Thanksgiving dinner with my sister, who has recently relocated for work (recall her post titled Job Search Tips from the Front Line). On this trip I was fortunate to have the opportunity to visit some historic residences from the turn of the century. On previous visits I visited some of the city’s dramatic public buildings, including historic Union Station, Denver Public Library, and the Denver Art Museum.

At the end of the 1800s, Victorian architecture was the norm for residences. The Milheim House, built in 1895, is something of a late-era Victorian/Queen Anne. The wrap-around porch, multi-story bay window bump out on the side, and pointed roof are give-aways. This house is particularly interesting, though, because it was moved across town to its current location in 1989. Weighing in at 583 tons, it’s still considered the heaviest home move west of the Mississippi. The movers placed steel cribbing below the exterior walls. A new foundation was constructed at the new site to permanently support the cribbing. Thus the one-time residence of the Unsinkable Molly Brown was preserved. Despite continuing appeal for Victorian architecture many turn-of-the century architects felt that a century of progress demanded a new American architecture. In 1877, architect Henry Hobson Richardson succeeded in reconstructing past styles into a new archetype with Trinity Church in Boston. The Richardsonian Romanesque style emphasizes strong massing, romanesque arches, and rusticated stonework. The significance of Richardson’s masterwork is succinctly described in the PBS show Ten Buildings that Changed America. Richardson’s style influenced residential construction (recall a previous article about the Glessner house on Prairie Avenue in Chicago). Another example of this architectural style applied to a home can be seen at The Castle Marne, a Bed and Breakfast Inn, across the street from the Milheim House in the Upper Colfax neighborhood of Denver. Interestingly, Castle Marne was built six years before the victorian Milheim House. We visited both homes as part of a special Victorian Holiday home tour.

Castle Marne was designed by architect William Lang to serve as the show home for a new subdivision on what was once the edge of the City. The current owners have done a nice job restoring the common areas of the home. Over time the building had been partitioned into apartments, then offices, and then ransacked. Much of the original woodwork has now been restored. One of the most interesting features is the large circular peacock window in the main stairway. The third floor of the home was actually intended to be a ballroom, but is now partitioned into guest rooms. Unfortunately, the rooms we viewed had not been much updated since the 1989 overhaul, so there’s yet another design style that is, um, distracting.

Competing architectural styles also influenced public buildings at the turn of the Century. In 1912, the Union Station railway station was constructed in the Beaux-arts style most famously employed in 19th century Paris. Beaux-arts architecture usually begins with a stone façade with visible horizontal lines on which sculptural ornamentation is dramatically added. The “UNION STATION Travel by Train” sign was added in 1952, and seems appropriate for the buoyant post-war era. Several notable architectural trends are jumped in the step from Baux-arts to post-war drive-in, but there are plenty of other places to read about the 30-or-so others.

Gio Ponti was an Italian Architect whose career spanned those transformative years from the 1920s into the 70s.  Early on, he was inspired by the Novecento Italiano artistic movement. (So now it’s obvious that I’ve been on a Google binge since sitting down to write this post.) The accompanying architectural style was something of an Italian Neo-classical but with cleaner lines and utilizing contemporary building techniques. Ponti’s 1971 building for the Denver Art Museum (DAM) is one of the preeminent buildings that define the style. The DAM North Building looks like a Medieval fortress from afar. Many of the windows are narrow slits again reminiscent of castle loopholes for defensive archers. Closer up, you can see some interesting things happening with the façade material and atypical fenestration, but it’s not one of my favorite designs. The building is notable, however, as one of the final works of a highly influential architect. The Denver Public Library, across the street from Ponti’s art museum, displays a post-modern style that arose as a counterpoint to Modernism and associated styles of the 50s and 60s.  Michael Graves was one of the leading architects in the Postmodern movement. He also designs home goods for JCPenny. (Yeah, I didn’t see that one coming either.)

The post-modern style again emphasizes architectural forms and ornament that were eschewed by the stripped-down modernist style. Often times the postmodern emphasis of a form extends well beyond function and serves only an esthetic contrivance. Opened in 1995, the Denver Public Library fits the postmodern form by using bold color choices, exaggerated forms, and an abundance of braces to support the high roof, when only a few would be structurally required. Though hugely significant architecturally, the DAM North Building and the Denver Public Library are not the newest, shiniest things on the block. The new DAM Frederic C. Hamilton Building has drawn almost all the attention of passersby since 2006. Designed by Daniel Libeskind, the Hamilton Building is covered in 9,000 titanium panels. Libeskind attributes the odd angular shape and reflective skin to “the geology of the Rockies, but most of all by the wide-open faces of the people of Denver.” (Huh. Google can’t help us decode the “wide-open faces of the people.”) This style, similar to Frank Gehry’s famous works, is known as Deconstructivism. “Good” deconstructivist structures have unpredictable facades or exhibit the concept of controlled chaos. However outrageous the motivations for the structure, I can confirm that it is a magnificent site – one that draws visitors toward it, if just because we like shinny things.

One can only begin to imagine how future generations will respond to the last century of architectural innovation. Will Victorian homes always to attractive wealthy handymen and bed and breakfast operators? Now that our buildings are so lightly clad, will we forever critique that Castle Marne just looks heavy? Will there be a post-modern revival period? At some point will avant-garde architecture be characterized by a clear sense of order and clarity? Time will tell, and Denver will be a wonderful living textbook for drawing conclusions about architectural style.