A Blockbuster About a Blockbuster: Structural Engineer Flourishes as Filmmaker 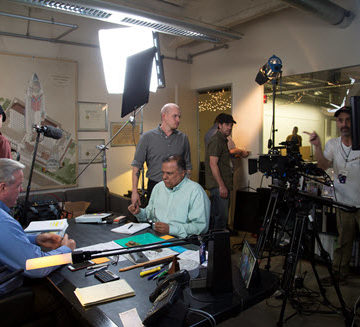 Dilip Khatri prepares an interview shoot for his film about the Wilshire Grand. PHOTO: Fred Cohen

Dilip Khatri didn’t tell a soul. Not at first, anyway.

It’s not that he wasn’t excited. It’s just that sometimes pursuing your dreams can be a little … “embarrassing,” Khatri says. “Yeah, it’s kind of embarrassing.

“Here I was, 44 years old, I have a doctorate, I’d been working in the engineering industry for 26 years. I had a nice career going, and then people look at you and say, ‘You’re going back to school to do what?!’”

Khatri, Ph.D., P.E., S.E., M.ASCE, a successful structural engineering business owner and professor, wanted to try his hand at filmmaking. So he enrolled in a scriptwriting class at the American Film Institute in Los Angeles, and loved it so much he invested more and more time into his artistic education.

“People thought I was nuts. And they probably still do,” Khatri said, laughing. “But I really wanted to pick up with that dream that I left off when I was 14 about making movies. That loose end was kind of hanging in the back of my mind. And there comes a point in your life where you say, ‘Look, I’m just gonna do it.’”
A decade later, no one’s questioning Khatri’s filmmaking dreams anymore. 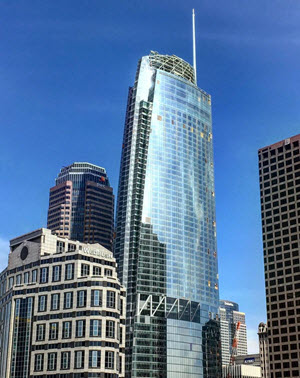 The Wilshire Grand stands out among the Los Angeles skyline.

Khatri has written, directed, and produced a documentary called Aspire to the Sky: The Wilshire Grand Story, detailing the design and construction of the tallest U.S. building west of the Mississippi River.

“We, as civil engineers, we really underrate ourselves. We don’t take credit for all the wonderful things we do. We’re so, so shy about our achievements,” Khatri said. “We really need to do something about that, and that’s one of the reasons I wanted to make this film.”

He started honing his craft making short films, including a popular series for the American Institute of Architects. As his skills improved, so did the scope of his projects, leading to the Wilshire Grand documentary. The film mixes stunning aerial visuals of the building with narrative storytelling and technical civil engineering information about the project.

The film has been accepted by the Architecture Design Art Film Festival and will screen Feb. 23 in Palm Springs, CA.

“The film’s been well-received. We’re getting some good feedback. We’ve gotten a distribution deal. I’m hoping it will really contribute to the profession,” Khatri said.

“I’ve gained more confidence now, that I can do it. I’m proud of what I’ve done. I’m very happy with the product. But I’m not leaving my engineering career. I love what I do. This is exactly what I want to do. I think I’ve found my spot.”

Watch the trailer for Aspire to the Sky: The Wilshire Grand Story and get a list of film screenings.