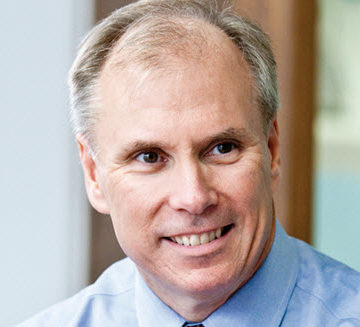 “That’s always the way I’ve been,” Pierson said. “I don’t see that there is a problem I can’t solve. And part of that is an adrenaline rush. It’s a thrill, right?”

For a career of solving challenging problems, Pierson, Esq., P.E., M.ASCE, has earned the 2016 Outstanding Projects and Leaders Lifetime Achievement Award for Management.

Pierson remembers a particularly daunting situation earlier in his career, during his time as global general counsel for Kvaerner E&C (now Kvaerner PLC). A financial crisis required a few large sales in only a few days.

“If there’s the most difficult job to do, I raise my hand,” Pierson said. “You’ve got a challenge in front of you, you attack it.”

Pierson’s ability to solve complex problems and negotiate solutions between opposing parties draws on his background as both an attorney and engineer.

See a video about the winner, as presented at the gala:

A first-generation college graduate from Toms River, NJ, Pierson received his engineering bachelor’s at Bucknell University and his master’s at the University of California, Berkeley, before the East Coast called him back in the form of Harvard Law School.

“I always had the thought at the back of my mind that I might go to law school,” Pierson said. “But always with the intent of being in the engineering construction field.”

“In engineering you’re taught to solve problems,” Pierson said. “Sometimes the solution isn’t elegant or pretty, but you get there.

Pierson returned to his alma mater a few years ago and started the Engineering Success Alliance at Bucknell to help engineering students from under-resourced high schools complete their degrees.

“It’s been a great success. Bucknell has done a wonderful job with it,” Pierson said. “It’s a program that we hope to show as a model for other schools around the country.”

He was named to Engineering News-Record’s Top 25 Newsmakers list in 2014 for his efforts.

Pierson takes pride in “the reputation I have for integrity, for doing the right thing, for treating people fairly – that to me is a great accomplishment because that is really the measure of who you are as a person.”

The OPAL Awards honor outstanding civil engineering leaders whose lifetime accomplishments contributed in one of five categories – construction, design, education, government, or management.  The 2016 honorees were recognized at the OPAL Awards Gala, March 17, 2016, in Arlington, VA.