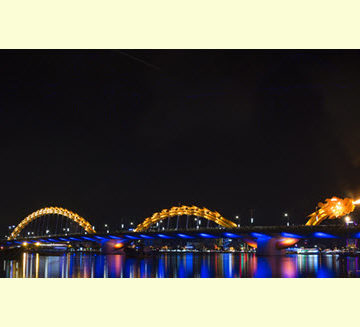 Louis Berger and Ammann & Whitney put together the winning design for a new bridge in Da Nang, Vietnam, with higher ambitions than simply crossing a river. They sought to give the region an aesthetic centerpiece.

The Dragon Bridge accomplished both, and is one of six projects to be honored as a finalist for the 2016 ASCE Outstanding Civil Engineering Achievement Award.

“It very much contributed functionally but also aesthetically to this part of the river and, really, the entire region,” said Ammann & Whitney President and CEO Nick Ivanoff. “Literally it became an overnight tourist attraction and a real sense a pride for the city.”

Functionally, the Dragon Bridge links the city of Da Nang across the Han River to the country’s developing eastern shores, the nearby beach resorts, and the route to the town of Hoi An.

Aesthetically, the Dragon Bridge is a low, parkway-styled structure that employs an at-grade approach at the western end, thus maintaining the natural scenic views of the city and river.

And, oh yeah, the bridge looks like a dragon.

“The dragon is a very important, very strong symbol for many of the countries in southeast Asia but particularly so in Vietnam,” Ivanoff said. “The whole idea was to show the dragon undulating across the river, and I think we captured that.”

Rather than the traditional twin arch supports running alongside the bridge deck, the Dragon Bridge features a single arch support down the centerline, giving the effect of a dragon rising from the deck. The arch, or dragon, structure is five tubular steel sections integral to the piers.

“They wanted the dragon to breathe fire and spit water,” Ivanoff said, chuckling. “I was rather dubious about that. Imagine you’re driving across the river and all of the sudden the bridge is shooting out a fireball.

“But, of course, it has become a show on Fridays and Saturday nights.”

The city closes the bridge to traffic on weekend evenings. The 15,000 LED lights bathe the bridge in greens, blues and purples, and the arch – or the head of the dragon – spouts fire and water.

ASCE announced the winning OCEA project at the Outstanding Project And Leaders Gala, March 17, 2016, in Arlington, VA. The evening also honored this year’s group of OPAL winners, as well as recipients of the Charles Pankow Award for Innovation, the Henry L. Michel Award for Industry Advancement of Research, and the ASCE Excellence in Journalism Award.