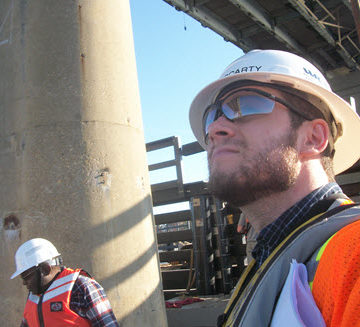 Through his work with ASCE and the Structural Engineering Institute, he has helped build a sense of community within Baltimore engineering circles by championing a series of hands-on site tours.

“I would say I am by nature an introvert. That’s something I’ve worked very hard on over the last few years,” said McCarty, S.E., P.E., named one of ASCE’s 2016 New Faces of Civil Engineering – Professional. “But I love to talk about engineering. I could talk about engineering with anybody for as long as you’d let me.”

The project structural engineer for Whitman, Requardt & Associates LLP in Baltimore showed an interest in building things as a very young child, and that interest turned into a career goal thanks to an outstanding high school physics class. Civil engineering was particularly attractive to McCarty.

“Most things we do are tangible,” McCarty said. “You put a lot of effort into a project and at the end of the day this structure is built that you participated in. It couldn’t have been built without you. And that structure is going to last 100 years. It’ll last for future generations. And you can look back over the course of your career and you have something real to show for it. You can point out to your parents, you can point out to your kids – ‘Yeah, I helped do that.’”

It makes sense then that McCarty is such a fan of the tangible, hands-on construction tours. He took over as president of SEI’s Maryland Chapter in 2013 and helped increase meeting frequency and attendance. His big push, though, was booking those construction tours.

“Looking around the Baltimore and Washington region before, I really didn’t feel like there were enough opportunities for young engineers to get out in the field,” McCarty said.

The group has taken 20 tours just in the last two years, including trips to the Baltimore/Washington International Airport, the Fells Point waterfront reconstruction, and the historic Jericho Covered Bridge.

“Young engineers wanted to see the construction going on at BWI just as much as seasoned engineers,” McCarty said. “They’re curious about what’s going on and want to see how these unique challenges to building and operating an airport are overcome.

“I think all engineers can appreciate the work and what goes into it. It really caters to a very diverse background. These construction tours we go on, even if I couldn’t speak the language, I would still have an amazing time.”

So, McCarty will continue to work as a structural engineer, building the tangible. But he may be surprised to find that his greatest accomplishment is the less tangible connections and friendships he’s helping to foster between his fellow Maryland engineers.

“It’s something I’m very proud of that we’re doing,” McCarty said. “I think it really helps energize our local engineering community and gets them excited about engineering and what they do.”

The honorees will be recognized during Engineers Week, which starts Feb. 21, and at ASCE’s annual Outstanding Projects And Leaders (OPAL) Gala, March 17, in Arlington, VA.