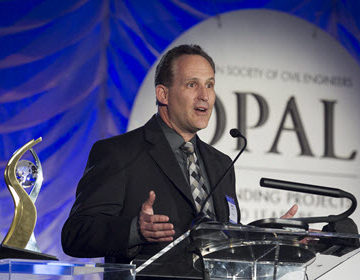 Atulkumar Shah, P.E., F.ASCE, earned his bachelor’s degree in civil engineering in his home country of India in 1977. Three years later, he moved to the United States to pursue his career.

Thursday night, flanked by his wife and son, the proud owner and president of ANS Consultants in South Plainfield, NJ, basked in his new ASCE Fellow status at the 2017 Outstanding Projects And Leaders Awards Gala in Arlington, VA.

“After 40 years, now I’m a Fellow,” said Shah, who followed both his grandfather and father into the profession and watched his son Vatsal Shah, Ph.D., P.E., M.ASCE, also become a civil engineer. “People always think, ‘What happens down the road? Will I be able to make a lot of money and have a good life?’ Well, civil engineering gives you both.”

“It’s terrific,” said John Casana, P.E., D.WRE, LEED AP, F.ASCE, Region 2 Director. “One, to learn about all the great projects and all the accomplishments of the leaders, but more importantly it’s great to interact on a personal basis with such an outstanding group of people.”

The event’s showstopper is the dramatic reveal of the Outstanding Civil Engineering Achievement project award, given this year to the San Diego County Water Authority’s Emergency and Carryover Storage Project.

San Diego County Water Authority Director of Engineering Jerry Reed III, P.E., M.ASCE, led his project team onstage to accept the award, mouthing the word “Wow,” over and over. It was a poignant moment for him, both professionally and personally.

“I worked 22 years for the water authority. I started off as a staff engineer and I worked my way up to director of engineering,” Reed said. “And I just visited my dad in Boston. He’s very sick. He has Parkinson’s, and he was very proud of me being a civil engineer,” Reed choked up again.

The OPAL Gala also salutes the five recipients of the 2017 Outstanding Projects And Leaders awards.

“This I regard as the pinnacle of my professional career,” Harry Poulos, Ph.D., P.E., DSc.Eng., Dist.M.ASCE, told the crowd from the stage after receiving the OPAL for outstanding contributions in design. 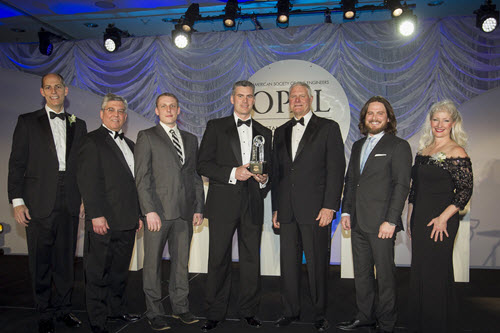 The youngest award-winner of the night was Dylan Baddour, a staff reporter at the Houston Chronicle and recipient of the 2017 ASCE Excellence in Journalism Award. A 2014 graduate of the University of Texas at Austin and already a highly influential infrastructure reporter, Baddour uses current events and archival documents to put Houston’s water crises and successes into context for his readers.

The gala also featured ASCE’s 2017 New Faces of Civil Engineering – a collection of 10 of the most accomplished members under 30.

“Seeing the trajectory of all the people who were honored, you realize that all of them were students at one time, all of them were young professionals at one time. They were in our shoes,” said James Kaklamanos, Ph.D., EIT, A.M.ASCE, a professor at Merrimack College (MA) and a 2017 New Faces honoree.

“Seeing the path that they took and what a career in civil engineering can give you, it was incredibly rewarding. I think I speak for the other New Faces, being honored along with all of these other accomplished individuals really means a lot.”

As the awards program transitioned to an afterglow reception, the Shah family enjoyed the moment, taking photos and talking shop with other industry leaders.

Vatsal Shah, a New Face of Civil Engineering himself in 2013, enjoyed putting the spotlight on his father.

“It’s incredible. When we grew up, there wasn’t much that we gave back to our parents in return. All of those things mom and dad do for us selflessly, not asking for anything in return,” Vatsal said.

“We finally get to a point where we can give something back – it’s not monetary, it’s not tangible, it’s not ‘Hey dad, here’s a tie.’ Engineers don’t do it for the money or the fame. We do it because we love what we do. And when the profession recognizes that you did a good job, that means more than anything in the world to us.

“An engineer can live off a good compliment for a few years. My father’s Fellowship is like that. It’s a recognition of his hard work.”