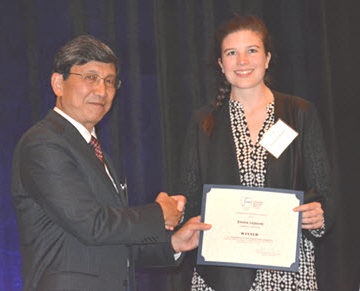 You wouldn’t blame Emma Lejeune if she conjured up the entire conversation in her imagination.

Lots of long hours alone in the office staring at computer screens and your mind starts playing tricks on you. You start talking to the books – and maybe they talk back. It’s understandable.

But this particular conversation did happen – at the 2017 Engineering Mechanics Institute Conference, last month in San Diego.

Lejeune, S.M.ASCE, a fourth-year Ph.D. candidate at Stanford University, was displaying her entry in the conference’s student poster contest when a man approached and took a special interest in her presentation.

Turns out this was no ordinary observer. He was Jifeng Xu, M.ASCE, a senior technical fellow at the Beijing Aeronautical Science and Technology Research Institute in China and chair of the EMI Stability Committee, whose work on the stability of materials played a key role in all those hours Lejeune had spent in the office doing research.

“That was a cool moment. We ended up talking for 15 minutes,” Lejeune said. “It’s totally crazy because for most of the work I do I’m just sitting on a computer in my office. So it’s a lot of fun to go to a conference and talk to people who are working on similar things, especially people who have directly influenced your work.”

Such are the connections enabled by the EMI Conference.

“The conference offers good networking for academics as well as connections to industry,” said Jiun-Shyan (J.S.) Chen, Ph.D., F.EMI, M.ASCE, president of EMI. “Ninety percent of EMI participants are from academia, so for them, the opportunity to make connections with the broader community is important. And of course it’s a good venue for getting an update on the most recent advances in technologies.”

Chen and Yuri Bazilevs, Ph.D., A.M.ASCE, both professors at the University of California, San Diego, served as co-chairs. With the Institute celebrating its 10th anniversary, this year’s conference was particularly special. The over-700 attendees marked an EMI high, while the lineup of six keynote speakers included two members of the National Academy of Engineering. The conference also honored ASCE Distinguished Member Zdenek Bazant, Ph.D., S.E., NAE, NAS, F.EMI, with many of his former students on hand to celebrate his 80th birthday.

“The presentations were of a very high quality,” Chen said. “And the participants felt they learned something very useful.”

Meanwhile, Lejeune – who, for the record, wound up winning the student poster competition – was not alone in her youth. The conference featured seven different student competitions, social events, and a tour of the UC San Diego eight-story shake table, as organizers continue to tailor the program to suit students and Younger Members.

“EMI is getting quite popular among the younger generation, which is very important,” Chen said. “We see junior faculty and also graduate students coming to the EMI conference. So we invited two National Science Foundation program managers; they gave a session targeted at junior faculty about how to write NSF proposals.”

For Lejeune, the excitement of meeting Xu and other mechanics heavyweights at the EMI Conference will carry over into the fall at Stanford. Her research is a remarkable intersecting of math, engineering, and science. She’s studied civil and environmental engineering. But these days she’s just as likely to open a biology textbook.

Essentially, she’s taking a computational model that was originally developed for fracture in metals and concrete and adapting it for biological tissue.

“I can use many of the same equations and apply them to a totally different type of problem,” Lejeune said.

And who knows? Perhaps someday Lejeune will see the research she’s doing now cited on a student poster at an EMI Conference of the not-so-distant future.

Learn more about the 2018 EMI Conference, hosted by the Massachusetts Institute of Technology.